“Countdown to Lee Min Ho” Drama Review: “I Am Sam” 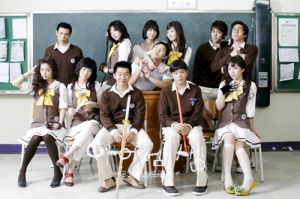 Less than a week remains to the big event! I’ll be heading to the Legendary Park Plaza Hotel for the 4 hour Lee Min Ho Fan Meeting event Sunday, March 10th.

And now for something rather interesting. Many may have never seen this drama as it is one of Lee Min Ho’s earlier works. Viewers beware: there are some really bad copies out there on the ‘net. Drama Fever has is a good source. I originally watched on a channel that mixed up sections and left out entire portions…

The stage is set in a high school with standards a bit below average. The focal homeroom classroom is comprised of most of the miscreants of the school as well as a few of the smarter and middle-of-the-road students. Mr. Jang is the mild-mannered, painfully awkward homeroom teacher seems to actually care about them all. Enter the gangster’s daughter, an off-the-wall personality who has no interest in home-schooling and little aptitude for it. She meets Mr. Jang and decides that perhaps attending the local high school might be fun. The amusement begins. 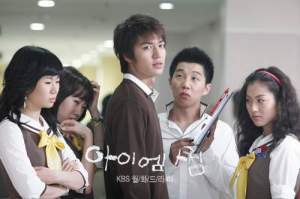 Yang Dong Geun was a bit weak as the leading man, Teacher Jang Yi San (“Sam”). His lumbering, stammering character lacked the charisma to be truly appealing. Still, his unbelievable optimistic, uncomplicated character makes for really hilarious lines: A teacher, remarking about yet another teaching quitting due to incorrigible students: “If it weren’t for the weapons, that female teacher might not have quit.” Teacher Jang (in a droll voice): “Yes, but the fact that they could make weapons means they’re really intelligent, right?” 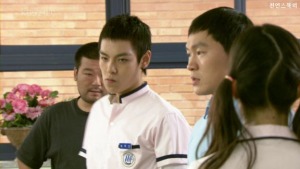 Many of the lesser characters were over-played, over-acted – and sadly not really in a fun, campy manner. The second female lead, Teacher Shin (Son Tae Yeong) was also too inane, weak and one-dimensional to be appealing. I think many of these characters are meant to be funny or goofy, but somehow miss the mark.

The saving grace for this drama was a cast that sported some really great actors and actresses. The talents of these few carried the show and made the drama worth watching despite the issues. Park Min Young (City Hunter’s Kim Nana) performs in her first real lead as Yoo Eun Byul. It is easy to see why she became a rising star thereafter. Her performance is sweet, funny and memorable. T.O.P also made his acting debut in this drama and his dark brooding character fit him well. Lee Min Ho, while not a leading character, became a scene-stealer whenever on-screen as Heo Mo Se, the heart-throb son of the principal. The following clip is one of the silly, but fun scenes: 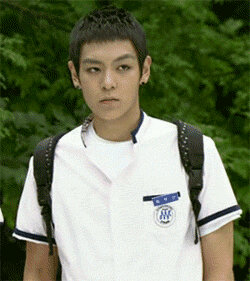 This drama is from 2007, but even forgiving its age the feel is rather low budget and simplistic cinematographically. Really bad special effects open the drama and set the tone for a lower-than-standard quality. Episode 1 features a few really strange scenes. Although the gangster dad is small in stature he unrealistically lifts and tosses a man across the room in one scene and in another, fires a shotgun putting a smoking hole in his study door. That in itself wouldn’t be odd, except Yang Dong Geun reacts as if a loud rapport has gone off next to his head yet the gun shot was miraculously silent. Hm. (Yeah – I replayed it a few times to be sure I didn’t miss something!) Shortly thereafter there’s another silent explosion and Park Min Young oddly and very unrealistic flys across a room. Sound effects and action are not the forte of this drama. In fact, leaving them out altogether might have been a real improvement.

The musical scoring was limited but somewhat cute. The main track, “Only Me” has kind of a 50’s-ish beat that works well with high schoolers getting into shenanigans.

”Love You” Byul aka Star  http://www.youtube.com/watch?v=VWI24X64ASI

I am glad I had the opportunity to see this drama, although one viewing will probably be enough. (OK, it’s actually twice since I had to re-watch most of it on Drama Fever to see what I missed the first time around!) It’s worthwhile to see some of these top stars early in their careers. While the plot line limped along at times, in general, the story was worth following and several characters captured my attention. 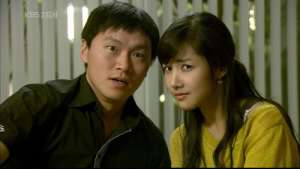