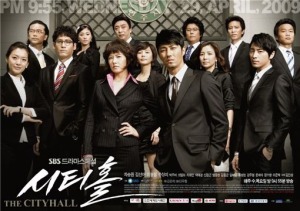 Whenever your mood is in need of a pick-me-up, any drama casting Kim Sun Ah in the lead is sure to the remedy. In terms of comedic timing, few actresses today can touch her unique vocal style and physical comedy. “City Hall” is a great example of silliness at it finest. Certainly, no one will mistake this drama for serious political commentary.

“City Hall” takes a humorous look at the political workings at the local and national levels. Jo Gook (Cha Sung Won) is a relentlessly driven political machine, the illegitimate son abandoned by his powerful, mysterious, politically connected and well-respected father BB (for Big Brother). His aspirations lead him to the small, rural town of Inju where he is sent to do some dirty work: remove the current Mayor and set in place a ‘puppet’ Mayor. Plans go awry when the ‘puppet’, Shin Mi Rae (Kim Sun Ah) not only begins to pull the strings, but grabs ahold of Jo Gook’s frayed ‘heartstrings’, as well.

The script is witty. While I would definitely classify this firmly in the comedy genre, there was enough drama and suspense to prevent it from being classified as inane. The plot and the characters are not so memorable that this drama consistently floats to the top of the list when making recommendations, but I have to admit I forgot how much I enjoyed it, when I sat down to re-watch it recently. The dramatic tension and plot twists keep viewing pleasurable worthwhile, even the second time around!

Kim Sun Ah is comedic genius. How can anyone not appreciate using tactics straight out of a Greek comedy to bring her recalcitrant Directors back in line. One look at the pool scene with her shimmies and “Ooooh!”s and you’re hooked!

Cha Seung Won was deliciously suave, charming and complex Jo Gook. His acting skill is apparent as he brings to life a driven but care-worn, strong but wounded, psychologically complex character. The transformations and changes in direction were credible and dramatic.

An interesting character in the drama was Director Lee (Lee Hyung Chul), who acts as her conscience, forcing her to look at the moral implications of what she does at every major step in the drama. The sometime dramatic, often comedic, relationship between him and him politically active wife Min Joo Hwa (Choo Sang Mi) was an interesting side story. 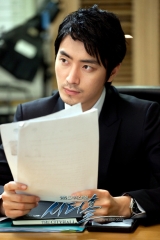 Our Jihoo character? (“Boys Over Flowers” – the nice guy who doesn’t get the girl.) That would be the intense, thoughtful, not-as-ambitious-as-his-boss Ha Soo In, played by Lee Joon Hyuk. A nice character, but one of the few that was underdeveloped in the drama, for the potential it held.

Throughout the drama, the slapstick-style comedy made the juxtaposed tender moments all the more heart-warming.

Drama clichés: crying in the rain, back hugs, covering people with blankets who are slumped over desks, hick (poor) girl & sophisticated (rich) guy, shower scene, over-the top romantic gestures, nice guy who doesn’t get the girl (or any girl for that matter). There were no Kpop star cameos, but a fun dance performance of Super Junior’s “Sorry, Sorry” by the City Hall Staffers.

Pretty scenery. Nice special effects when necessary, but not overused or overdone (like when Shin Mi Rae is imagining what she’s like to do for Inju’s future from the top of the hill.) Many of the locations filmed, both indoor and outdoor, are locations that have been used in many, many dramas. I can appreciate, however, the fun (the challenge?) of filming multiple actors and actresses amidst piles of herring on a fishing boat.

There were a few songs that appealed to me in the OST, but I cannot classify this tracklist as earth-shattering.

The theme song is cute: Okay, I’ll Believe In Myself by Jung In (feat. Bizzy) http://www.youtube.com/watch?v=Q5bpLjADBDc

One of the most important considerations in making a comedy successful is timing and pacing. I think that “City Hall” is a classic example of how to do it right. Just when things start to get really silly – BAM – dramatic tension occurs. And just before the pace begins to bog down – WHAP – a burst of silly slaps you upside the head. Nothing earth-shattering in terms of dramatic accomplishments, but completely enjoyable. Delightful characters. Nice wrap-up at the finale with all loose ends neatly tied with a bow on top. What more is needed? Well – maybe some fried chicken and a beer….