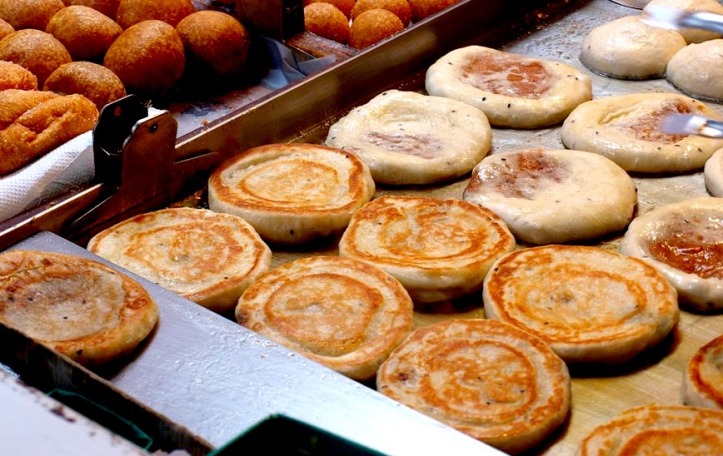 Let’s start this post off with something controversial, I am not keen on Korean Sweets. Colorful Jellys or glutinous rice cakes do not seem appetizing for a person raised on glazed doughnuts, a plethora of pies, and 31 flavors of Ice-Cream.  Perhaps I do not have a “sophisticated palette”, but the phrase glutinous gives me gastro-emisis .

Today I went to a grocery store called H-Mart and after a making a food sample circuit around the store (asking questions like “so you call these dumplings? Never heard of it…nom nom) I took a stroll to the hot foods section and saw a peculiar piece of paper taped on the wall, with a drawn on message “Honey Pancakes 2 for $3.  Honey Pancakes aka  Honey Hotcakes aka “Hotteok” is a Korean Street Food typically filled with honey, chopped nuts, brown sugar and cinnamon, cooked on a griddle.

I demanded a double-stack from the employee behind the register and waited.  Looking to the other side of the store I saw Paris Baguette and was a bit concerned that I was going to get some wannabe European-Style dessert. The employee came back and I was presented not with two pieces of fancy pants crepes, but with two pieces of thick glorious American-Style flapjacks.  After a few blinks of astonishment and an exhale of surprise, I sauntered to the cafeteria and sat down to admire the Honey Pancakes.

The warmth radiating from the flapjacks titillated my senses, the fragrance of sweet batter so comforting, I cut a triangular piece and saw a thin layer of honey, and crushed nuts nestled between two  buttery stacks of soft pancakes.  A quick bite and I began to whimper at how delicious and enjoyable the Honey Pancakes were.  I then called them “Ohm” Pancakes, as in “Oh My Gosh These Pancakes are Flippin’ Awesome!”. Afterwards, I aptly rushed to compliment the chef in his efforts.

Apparently, Honey Pancakes are the first in what will be a series of “Korean Street Food” that will be served at the H-Mart in Mira Mesa. This KKonnect Writer is excited to see what is coming next.   Next in line will be a Hazelnut Chocolate Hotteok, so give up on losing weight for the next few months.