How exactly does one adequately transition from Dae Jang Geum to Vampire Prosecutor? It’s a valid question.

The two dramas could not possibly be more different. Honestly, I was really expecting to not like these dramas. In fact, I never intended to watch the second season, but lo and to my astonishment, my expectations were, well, wrong.  I watched both seasons back-to-back, not stopping for a breath.

Having refused (for many years now) to succumb to the whole “Twilight” saga thing, the overdone vampire concept does not hold much appeal for me. Remarkably well conceptualized and visually appealing, Vampire Prosecutor and Vampire Prosecutor 2 were surprises. They had the same slick, sexy sci-fi presentation that makes American dramas like “Fringe”, “Supernatural” and “Warehouse 13” appealing – just credible enough to be engaging instead of tacky, enigmatic instead of preposterous.

The format is quite unusual for a Korean drama in that each episode is somewhat standalone – in other words – each tells its own little story, quite similar to American crime dramas like “CSI”, “Criminal Minds” or “Bones”. Like the American dramas there are thematic plot lines following the main characters from episode to episode making sequential viewing preferential, but not entirely essential. The thread of mystery, the titillating back-story surrounding our Vampire Prosecutor imparted piecemeal in each episode is part of what keeps the viewer waiting for the next episode.

The premise is simple: A prosecutor (who happens to be a vampire, albeit reluctantly) and his team of non-vampire associates solve various well-scripted crimes. The hook? Being a vampire gives Min Tae Yeon (Yeon Jung Hoon) an edge in crime-solving because tasting the blood of the victim allows him to experience the victim’s death. Painful, to be sure, but he is often able to determine the main culprit(s) instantaneously. His faithful sidekick and confidant is Detective Hwang Soon Bum (Lee Won

Jong) who serves not only as an essential crime-fighting team member, but also as ‘big brother’ to the troupe. Prosecutor Yoo Jung In (Lee Young Ah) is the new member to the team and seriously wants to know what secret her boss, Prosecutor Min is hiding from her. Rounding out the team is Kim Joo Young as Choi Dong Man, the young intern eager to win approval and full-time status with his lab skills.

It’s frustratingly unclear why the detective, Hwang Soon Bum, knows about Min Tae Yeon’s dark secret from the beginning. There are a few people with inside knowledge, convenient to be sure, but the fact that we didn’t know why throughout was distracting and somewhat annoying. Some, of course, turn out to be vampires themselves! 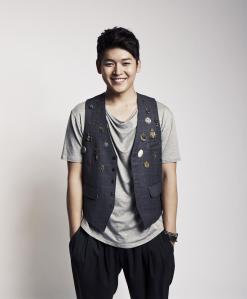 The first season featured sexy coroner Soo Hee (Kim Ye Jin). Dong Man and Soon Bum spend much time vying for the best view of her – ah – attributes. There is a priceless scene involving Soo Hee demonstrating how the killer stabbed the victim using Dong Man as a stand-in. Dong Man is miming ecstasy as she wraps her arms around him from behind.

Coming fresh off of watching “Dae Jang Geum,” I found it amusing to find references to the drama in episode 8, when it is discovered that a person they are interrogating is named Lee Young Ae. (But whose appearance is hilariously in contrast to the beautiful idol.)

Vampire Prosecutor 2 had the same team minus the sexy coroner, adding in her place a grandfatherly figure, quickly beloved by the staff: Lee Kyoung Young as Jo Jyung Hyun. Vampire Prosecutor 2 also had more substantial plot lines focusing on the main characters in the traditional K-drama fashion, (definitely requiring sequential viewing) rather than the American style crime drama format of the previous season. An important character carried over from Season 1, the faceless villain vampire 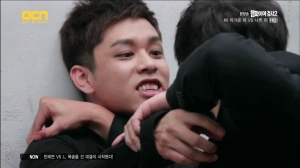 , is unmasked early in Season 2 – Kwon Hyun Sang identified as “L”. As if to counteract the dastardliness of the villain, teeny tiny sweetheart Kim Ji Young was added Ji-Ae, the staff’s ‘adopted’ daughter. This pint-sized sweetie was amazingly convincing in her heart-wrenchingly tearful scenes.

Quick note 1: Vampire Prosecutor 2 Episode 6 is a direct rip-off of “Miss Congeniality” with Prosecutor Yoo made over by a flamboyant stylist so she can infiltrate a fashion show as a model. It was, however, entertaining none-the-less.

Quick note 2: A massive cliffhanger at the end of Season 2 demands a Season 3, which is apparently in OCN’s 2013 lineup, but no set dates have been confirmed.

Edgy. Visually exciting. Unique scene transitions – excellent pacing. Cool slow-mo fight scenes showing off the superhuman strength of our fanged hero. A minor distraction was that the same video clip of blood cells, internal organs, etc. was used every time Prosecutor Min ‘sampled’ a victim’s blood. What was cool the first time was old by the end. Overall, though, the cinematography was excellent.

While thematically vampirism is certainly overused, at least it was used somewhat creatively in this series, and not as the main point of the drama. The hip cinematographic style, contemporary music and unusual format made viewing quite satisfying. The creation of good characters that viewers wanted to empathize with and pursue made the series worth following. Excellent acting added to the appeal.

Overall, my surprise at the intensity of my enthusiasm for this drama mirrors my initial surprise at the appeal of Korean dramas in general. I guess they will never fail to surprise me with unusual quality and fascination. At least, I (bloody) hope not. 😉