“Shut up Flower Boy Band” tells the endearing story of six boys in a high school rock band, appropriately named “Eye Candy”, and their journey to make a name for themselves. After their high school gets closed down, the delinquent boys are transferred to another high school. But this one is an elite private high school for the smartest and the richest, two traits that none of the musicians have. The boys initially refuse the transfer and decide to drop out and continue their quest to stardom, when they find out their rivals, another high school rock band called Strawberry Fields, attends their new school. They realize it might be more fun to play around with the rich kids, mess with their enemies, and conquer the hearts of their female classmates with their flower boy looks. 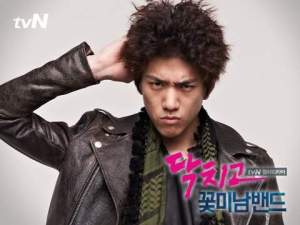 Joo Byung Hee (played by Lee Min Ki) is the crazy, eccentric member of the group and also the leader of Eye Candy. With a true artist’s heart, he doesn’t ever obey the rules or uphold the expectations of society and does whatever feels right to him, and whatever inspires him. He meets a high school girl named Soo Ah who he instantly declares his “muse”. However, she is currently being courted by the leader of Eye Candy’s rival band, Strawberry Fields.  Kwon Ji Hyuk (played by Sung Joon) is the second in command of the band. He is also extremely passionate about music, and very loyal to the friends he holds dear. However, he soon finds himself attached to his best friend’s “muse” and has to hide his feelings from his fellow band members.

Lee Hyun Soo (played by Kim Myung Soo) is the band’s “Ice Prince”. He is often with a frown on his face and has a very serious, mature personality. He tends to think of the future and doesn’t live on just the present like his fellow members. He is protective of his friends and also his little sister that he takes care of, when he is not practicing the guitar.

Jang Do il (played by Lee Hyun Jae) is the drummer of the group and son of a powerful mob boss. He is also very serious, is very quiet most of the time, and likes to keep his privacy, even from the members. He sleeps on the couch of his father’s billiard hall to avoid going home.

Kim Ha Jin (played by Yoo Min Kyu) plays the bass and is the band’s playboy, constantly flirting with the group’s fans and any pretty girl he meets in a club. Until he develops a sincere crush on solo singer, Ye Rim, who only treats him as a friend.

His best friend is Seo Kyung Jong (played by Kim Min Suk) who plays the keyboard for the band and is the “country-boy” member. He is the baby of group, not only because of his height but because of his innocent nature. He often tries to be the peacemaker whenever the boys get into fights among themselves.

Im Soo Ah (played by Jo Bo Ah) is the shy classmate at the band’s new school. Because of her family’s tight financial situation she is forced to live in hiding from loan sharks while her father flees the country to try and make some money to pay them back. She struggles to hide her situation from her judgmental classmates with the help of the Eye Candy boys and ends up developing a strong bond with the boys, especially with Kwon Ji Hyuk. Bang Woo Kyung (played by Kim Jung Min) is a longtime friend and supporter of the group who has an interest in Kwon Ji Hyuk that she never tries to hide. She is very loud and often nags the younger boys but she is very fond of them and genuinely cares about them. She is unaware of a different member’s one sided crush on her.

“John Lennon said, ‘The Beatles are more famous than Jesus.’. We’re not famous or special, but we’re just doing what we want, right now. The world that surrounds us is gray and we can’t see our futures. But for now, we just shut up and run – to the time that’s waiting for us.” – Ji Hyuk.

–Future: The Eye Candy boys are still teenagers, and like all teenagers they are worried about their future and most are still unsure of what path to take, what job to have, and what kind of life to live. These boys do not have social connections, family that can help them, nor do they care very much about their education. These boys love music and that’s what they are passionate about. They can’t predict how their futures are going to end up, but they can only live in the present and continue to do what they love.

–Fame: When the possibility of fame and recognition is presented to the boys, all of them are willing to take it, but at what cost? They have to sacrifice their creative freedom to get their music known, and some of the members are willing to do what is need to become famous while others would rather start from scratch. Fame has tended to be the downfall for many singers and bands worldwide, and now once again, it approaches Eye Candy to test their friendship.

–Friendship: The strongest emotion in the entire drama had to be the intense amount of loyalty these boys had for each other. They weren’t just friends; they were all like family to each other (especially since some of them didn’t have any family to begin with). These boys were never afraid to defend one another, instantly jumping into a fist fights and other altercations, to back up their friends even if they were right or not. Of course their friendship was tested several times with the usual seductions of life: money and girls.

–Rooftop Apartments: Based on the reactions of the classmates, apparently living in a one room rooftop apartment is considered the lowest one can go (economically). Both the male and female leads live in one room apartments on the rooftops of buildings next door to each other, which is how they become friends. Both of them live there because they can’t afford to live anywhere else, however Kwon Ji Hyuk isn’t ashamed of where he lives while Soo Ah tries everything she can to hide her housing situation from her peers. The immense amount of pressure to keep up appearances forces high school students to live very stressful lives. They  are always striving to be better than their classmates.

This is probably the highest score I’ve ever given a drama and I feel like this drama is probably going to stay up there in the top position for a while. It is my personal favorite of the “Flower Boy Series” because of the strong friendships throughout the drama. I was completely captivated by all the boys (not only because of their looks….well maybe a bit) through their dynamic personalities and the loyalty they all held for one another. All of the secondary characters, from the teachers to the classmates were also important in their roles, and the drama was able to balance between all the characters giving them enough character development. I would write so much more if I could but then I’d be writing a 20 page essay on everything I loved about this drama. If only Eye Candy was real, then I know I’d be a fan.