I’m so confused. On one hand, there was much I really disliked about this drama. On the other hand, I found myself wanting to see each new episode.

The story began as a somewhat interesting story about a writer, intrigued by a man she witnesses and becomes curious about, and who disguises herself to be close to the man to write a story. The intrigue begins when the characters in what appears to be an exclusive, but ordinary nail salon, empathize greatly with their clientele and assist them above and beyond the normal call of duty.

The story turned strange when what was originally fiction, as written by the main character, became paranormal events: gumihos and ghosts.

The trailers aren’t very helpful, but at least you can see the characters. Sort of.

The script started out as a somewhat interesting if cliché storyline, but turned really weird around episode 4. Why the odd supernatural elements needed to be incorporated as real and not just part of the fictional account by the cross-dressing author, is not clear. The storyline certainly wasn’t any better for it and was actually just – well – stilted and odd. The script, I must say, was a poorly constructed conglomeration of stolen motifs with a few well written scenes.

The episode by episode philanthropic adventures of the nail shop artists was the best part of the drama. OK, there was some really creative, if impractical, nail art, as well. The other parts were unnecessary, and out of place.

Literally Filled With Drama Cliches: Girl disguised as a boy, love triangle, accidental kiss (really – do they always fall on each others lips???), gumihos, ghosts & shamen, KPOP cameos (Cheon Doong, a.k.a. Thunder, from MBLAQ and Park Gyu Ri of KARA), piggyback rides, twisted ankles, stiff-faced kisses, fiction that becomes real. It could have almost been a tongue-in-cheek march through every possible cliché  and drama scene re-do available. Done purposely? I doubt it. If so, the humor was far too subtle (read: non-existent).

So weird. So why did I want to keep watching? 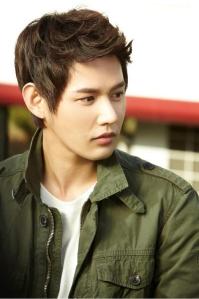 Jun Ji Hoo as Alex presented an intriguing figure that held the viewers interest and was well played if not well developed. In the final analysis, the character fleshed out along pretty predictable lines although there was room (and, indeed illusions to) far more interesting character details. The brevity of the series was one of the handicaps that hampered character development, but I think a lack of creativity was a far more serious issue in the end. 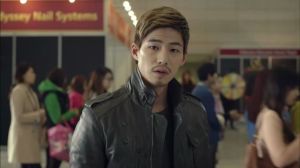 The character of Kay, played by Song Jae Rim, was another that was interesting to begin with but petered out into someone rather pathetic and needy. I kept hoping for a better tie-in for his character, but alas, no such luck. His was one that held a lot of potential but turned out to be a major disappointment – not due as much to the acting as to the script.

Cheong Doong, our KPOP cameo kid, put in a respectable performance as Jin, the playboy who fell in love. His character was at least consistent, if one-dimensional. Best friend to all, he was cheerful, immature, and, truthfully, a somewhat delightful character to follow.

The main actress, Park Gyu Ri,  who played Hong Yuh Joo, cross-dressing web novelist was far more palatable as a man than a woman. The storybook scenes were so over dramatized as to be ridiculous and – I have to say it – if I was stuck in a small room with that voice for very long I might go crazy. The high-pitched nasally voice thing was extraordinarily irritating. She didn’t use that voice as man.

Also – the love triangle: It didn’t work. From the beginning, despite Kay’s apparent sincerity, Yuh Joo seemed to be dating him out of pity only, her true feelings being for Alex (purportedly). There was never really a point were anyone could have been convinced that her feelings miraculously changed, yet…  Truthfully, the character played by Park Gyu Ri was the major weak link in the drama. I’ll grant that the short 10 episodes of the drama may not have been adequate for great character or story development, but I found the character less than credible from the beginning.

So, we have a questionable script with some decent acting, some – not so much. Still not really enough to account for my inexplicable interest.

Interesting effects were used when stories were being told: black and white photography, watercolor masks to make the images appears as if they are illustrations in a book. The effects changed throughout. They finally settled on one format for the main “story” being told by the novelist when she started writing about herself and her co-workers, providing cinematic continuity. The costumes were odd, but consistent.

She’s a better singer than actress: “I Will Wait” Park Gyu Ri http://youtu.be/_oe5wLCUOh8

Maybe this is one of those dramas that you have to watch without thinking about anything at all, because if you do, nothing makes sense. The ending was pretty bad, too. That said, I enjoyed watching each episode (except the final one) and it was only after viewing that I started picking it apart and seeing all the flaws. Were the humanitarian efforts of the Nail Shop Team my big draw in? Perhaps I was hoping for some epic conclusion? Perhaps I was waiting for something surprising that made everything suddenly make sense? Perhaps it can be likened to the sensation of incessantly picking at a scab and hoping it won’t scar? Whatever the reason, I watched to the end without regret.

So, in conclusion, there is a certain charisma to this drama. I just wouldn’t dwell on it too long… 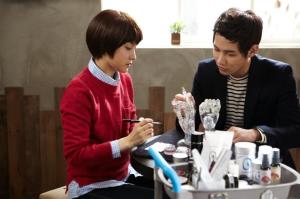