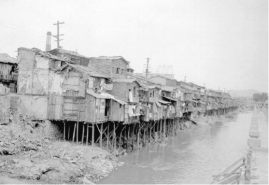 Cheong Gye Cheon Stream is located in downtown Seoul, which divides the city into northern and southern part of the city. The stream was either full of water during summer monsoon seasons or dried up the rest of the year and at times, the stream would overflow causing flooding in the downtown area. In 1406, in order to resolve the problem of flooding, King Taejong planned to construct a drainage system. In 1411, 53,000 laborers worked to enhance the stream by creating stone embankments and stone bridges across the stream.

During the Japanese rule (1914), the Japanese came up with a new name for the stream called ‘Cheong Gye Cheong’ which means “clear water stream.” On the onset of 1925, the Japanese covered many of the stream’s tributaries converting them into covered sewers for an underground sewage system for Seoul. In addition, the Japanese had developed several plans for the stream including covering up the stream to create land for new urban development, creating a roadway for cars, and creating a tram and an underground subway. However, all these plans failed due to lack of funding. Post World War II, Korea developed plans to dredge the stream which had ultimately become neglected because of poor maintenance by the Japanese. This plan also was impeded by the Korean War where refugees came to Seoul and settled on the Cheong Gye Cheong stream.

In the 1950s, the stream became a symbol of poverty and filth because people would dump their trash and garbage into the stream. The solution was to build the stream underground. This project lasted from 1955 to 1977. Between 1967 and 1971, a four-lane elevated freeway was built above the stream. The huts were removed and residents were forced to relocate and modern stores and industrial buildings were built there in its place.

In 2003, Lee Myung Bak ran for Seoul mayor and one of his key campaigns was to remove the freeway above the stream, restoring the river in an attempt to revitalize the area economically. His goal was to make Seoul the central hub of Northeast Asia by attracting tourism and investment from multinational companies and international organizations. Despite some opposition, an overwhelming majority 79.1% of Seoul residents supported the project. As soon as Lee was elected mayor in June 2001, he immediately went into planning mode and began implementing the project. The stream restoration began in July 2003 and ended in September 2005. 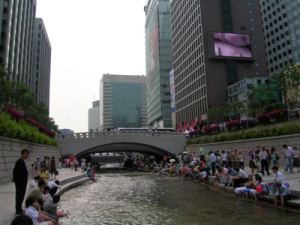 Cheong Gye Cheon today is a major touristy location where people with their family and friends come to relax and take walks along the stream. On occasion, there are performances held by the stream so the public can watch and enjoy the free entertainment. Cheong Gye Cheon has become a very modernized landmark and is the central hub for Seoul.

About writer:
Thomas is a recent graduate from San Diego State University.