The popular romantic fantasy film, A Werewolf Boy, starring Park Bo-young and Song Joong-ki is set to be released on DVD on August 13th. 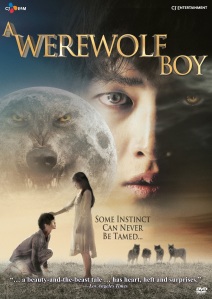 A Werewolf Boy (늑대소년) is the story of Kim Su-ni, an elderly woman living in the United States who receives a phone call that sends her packing to Korea once again. She heads back to the countryside cottage she stayed at as a youth, and is overwhelmed by the memories in this village. For when she was a teenager, her family took in a young wild boy, who didn’t know how to read, speak or interact with other human beings. The family gave him the name Chul-soo, and even though Su-ni was annoyed with his presence, she became in charge of “training” him; teaching him how to wear clothes, how to write and other human behaviors. Through her attempts to change Chul-soo and make him “civilized”, the two form a strong bond that slowly changes into love. However, he gets tempted to invoke his “beast” instincts and soon becomes a target from the angry villagers. In order to save him, Sun-ni must leave him behind but promises to return to him one day.

A Werewolf Boy was released through CJ Entertainment America which is the U.S extension for CJ Entertainment and Media, Korea’s number one filmmaker and distributor Company. E&M has developed and distributed 200 premium movie theater sites, in order to spread awareness of the Korean Cinematic culture and is one of the lead concert promoters in establishing “K-Pop” as a world music genre. Others popular films they have released includes The Man from Nowhere, The Good, the Bad, the Weird, A Bittersweet Life, Joint Security Area and the Vengeance trilogy.

The DVD is presented in Korean 5.1 Dolby Digital Sound, comes with English subtitles and has a running time for approximately 120 minutes. The DVD also comes with special features including “The Making of”, “The Language of Chul-soo”, deleted scenes with commentary and footage of their poster shoot.