Will Cyrano, Playing Cupid in the Theatre, Overcome his Sense of Inadequacy or Will Roxanne Perish Rejected?

Based very loosely on the famous Cyrano de Bergerac, Dating Agency: Cyrano introduces a modern and uniquely Korean flavor to a classic tale.

Once a financially struggling theatre, The Theatre Cyrano has become a secretive agency that hires itself out for high-tech matchmaking services. The owner, still struggling under a debt burden left by his deceased friend and partner, is the stoic, intelligent, emotionally blunt Seo Byung-hoon. He is assisted by engineering whiz Moo-jin, a sweet, but romantically naïve young man, and Do Ah-rang, a high school kid who dreams of becoming an actor.

Their well-scripted world is turned askew when Gong Min-young walks in the door. Her highly romanticized view of the world is a source of scorn for Byung-hoon, curiosity for Moo-jin, and admiration for Ah-rang. Min-young is intrigued by the work done by Cyrano Dating Agency and is drawn towards the ascetic and impersonal Byung-hoon, despite his best efforts to dissuade her.

Cha Seung-pyo is the romantic, mysterious “Master” next door – a chef by current trade, who we soon realize has had a dark past. He is captivated by Min-young and perturbed by Byung-hoon. The early episodes point to a deeper story between the two men.

The ‘Cyrano’ theme was an interesting and unique choice for a Korean drama adaptation. Lee Jong-hyuk (A Gentleman’s Dignity, Chuno) was a thought-provoking choice for the lead role of Seo Byung-hoon, our contemporary Korean Cyrano de Bergerac. Although attractive, his features are not the standard pretty-boy adorable, nor are they ruggedly handsome. While he does not sport Cyrano’s renowned beak, his personality, as portrayed in the drama, had both the panache and emotional shortcomings relevant to a Cyrano-esque character.

By far the best actress that I’ve seen amongst the women of SNSD, Choi Soo-young, (The 3rd Hospital, Unstoppable Marriage) was delightful as Gong Min-young, the charming Roxanne of the Cyrano story. The love interest of two rival males, Soo-young played the role with the wide-eyed romantic optimism critical to the role.  Her character was not, however, weak, but able to stand up to the strong men around her. Engaging and attractive enough to gain the loyalty of those around her, the Min-young character was like whipping cream on an espresso – a dollop of sweet joy floating atop the darkness.

Rounding out the Cyrano Agency were two young men: Hong Jong-hyun (Jeon Woo-chi, Wild Romance) as Moo-jin, and Jo Yoon-woo (Strongest KPOP Survival, Flower Boy Ramen Shop) as Do Ah-rang. Both young men provided interesting characters integral to the plot but also appealing in their own

right. While the Do Ah-rang character was sweet, it was not as well developed or as intriguing as the pensive Moo-jin. Although identifiable by his economy of words and notoriously expressionless face, he was always understood, his meaning and his revelations clear despite their subtle presentation. 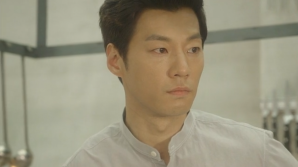 The character of Cha Seung-pyo, restaurateur, was a collection of contradictory actions and emotions mixed to create a well-thought-out, well-rounded character with complexity as rare as thundersnow. Lee Chun-hee (Take Care of Us, Captain, Road Number One) perfected the bad-boy glare, yet tugged at our emotions with his sincere attraction for Min-young. Along with his two comic henchmen, Min-shik and Young-dal, played by Bae Seong-woo and Kim Min-kyo, (two goons plucked straight out of Kiss Me Kate!), Seung-pyo provides mystery and intrigue throughout much of the drama.

As stated earlier, the cameo appearances of A-list stars was a fun treat: Lee Chung-ah as a ballerina and Choi Won-young as the sommelier she likes; Im Hyung-joon as veterinarian Jin Joon-hyuk, who is crushing on librarian Lee Yoon-ji; Lee Taemin (yep, from SHINee) as (what else) and idol singer; Lee Kwang-soo as a baker with a crush on Goo

Eun-ae, a chef; Jung Yoo-mi as a hilariously creepy girl with a crush on Gong Woo, a magician; and Ye Ji-won as a nurse in love with firefighter Im Won-hee.

Quite the all-star parade.

Due to the surveillance work necessary to the Cyrano Agency agenda, interesting and fun camera shots/angles were often seen. The majority of the drama took place inside the Cyrano Theatre or the restaurant next door, limiting the need for extensive sets. The theatre set, however, was a fun construction consisting of multiple rooms, glass enclosures and enough silly eye-candy details to please a Willy Wonka fan. The creative lighting used inside the theatre evoked a sense of make-believe – perfect for the ‘creative’ scenarios dreamt up by the Cyrano team for their clients.

All of the “Flower Boy” dramas, save Ramen Shop, have a certain flavor that sets them far apart from the standard table fare served up by the drama industry today. While Ramen Shop was sweet and fun, it followed the standard formats and had the same general romantic comedy feel of its contemporaries. The others in the series have all been just a bit edgier, a little off-center, slightly off the beaten path in a direction that makes them fresh and fun.

Dating Agency: Cyrano did not disappoint in that respect: a little bit of quirky, a lot of fun. In some respects it solidly nailed what Nail Shop Paris tried and failed to accomplish: a vanguard drama with fun sketches to capture the feel of the short story or single-episode series.

All in all, it is a wonderful addition to the Flower Boy Garden. 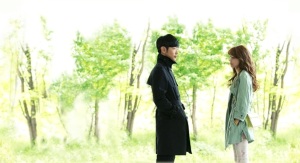