Secret Flower Boy Cupids? Where can I find this dating agency?

Based on 2010 romantic comedy “Cyrano Agency”, Dating Agency: Cyrano is the fourth installment in the Flower Boy series. Cyrano Theater faces being closed down for good, so director Seo Byung-hoon takes over his friend’s theater and starts a dating agency to pay back that friend’s debt. Assisted by the younger flower boys, Moo-jin and Ah-rang, and the spirited Mi-young, these four put together romantic situations for their clients and help them woo the people they love.

Seo Byung-hoon (played by Lee Jong-hyuk) is the older director who comes back to Korea when he hears of his friend’s death. He vows to restore the rundown theater to its once renounced glory, but he can’t do so until he pays off the enormous debt. Despite love being the core element of his work, he doesn’t believe in love and has a very disagreeable attitude towards others. He is the natural leader of the four – not only because of his age, but because he is a mastermind when it comes to thinking of heartfelt and touching lines for his clients to say to the targets and planning intricate operations to show off their client’s positive aspects and sincerity. 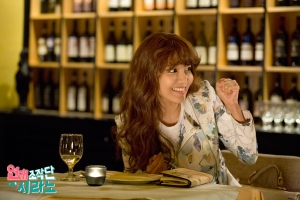 Gong Min-young (played by Choi Soo-young) is the bubbly new member of Cyrano and the only female of the group. She gets recruited after expressing strong determination in her previous matchmaking job, and demonstrates that she is willing to do whatever it takes to get two people who love each other to be together. She is diehard romantic. Despite being shown the cruel sides of relationship, she still remains positive on true love and believes everything in life happens for a reason. A bad experience means one is just a step closer to finding their soulmate.

Moo-jin (played by Hong Jong-hyun) is the genius engineer of the group and is in charge of all the technical devices used in their missions. As one of the flower boys, he is strikingly handsome and paired with his black motorcycle and dark and mysterious personality, he is an obvious attraction to the girls around him. However, he is completely clueless on the matters of love, never having been exposed to any in his life, thus keeping to himself and saying as little as possible. 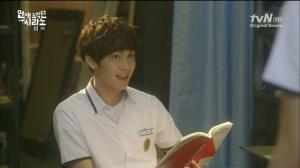 Do Ah-rang (played by Jo Yoon-woo) is the youngest member of the group, a 19-year-old high school student who wants to be an actor. He is a kind-hearted individual who tries to keep the mood up between the somber Moo-jin and the irritable Byung-hoon. He has yet to fall in love, making him naïve on the topic of love as well as Moo-jin.

Cha Seung-pyo (played by Lee Chun Hee) is the chief and owner of the restaurant next door to the Cyrano Theater.  With a sketchy past he tries so desperately to keep hidden, he finds himself drawn to Gong Min-young’s peppy personality, while at the same time displays a remarkably cold persona to Byung-hoon, indicating a troublesome past between the two. He often helps the Cyrano gang with their missions, even lending his restaurant on occasion for one of their “set-ups”. He even comforts Min-young whenever she gets frustrated with the boys’ lack of compassion towards their clients. 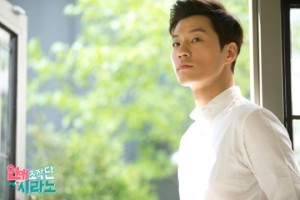 Other characters in the drama were the different clients/targets (as each mini storyline lasted from 2-3 episodes before it switched to another “job”). Many of these roles were filled by familiar faces. Jin Ji-hee, Lee Chung-ah, Choi Won-young, Lee Yoon-ji, Lee Tae-min (SHINee),  Lee Kwang-soo, Gong Yoo and Jung Yoo-mi all played a variety of characters – from ballerina to chef, magician to even idol singer. (And I think we can all guess who that one was!)

“True love can only be achieved through true feelings.” – Gong Min-young

The reason why the Dating Agency: Cyrano worked is because it didn’t try to fabricate love out of thin air. They simply dug up sentimental emotions, turning points for the clients/targets, and launched them into full view. They waved the hidden feelings around like obvious flags, but played them off as circumstance or coincidence. For all of their “missions” to work, the sincere emotions of the client had to be there. And that became the basis of all their work – sincerity and true love.

There were many accusations that Dating Agency: Cyrano was not a morally abiding business, simply using tricks and manipulating the emotions of others to fit into their perfect situations. The group consistently tried to prove to all of those who criticize their work that they are not “creating” any emotions that were not already there. None of their plans are 100% guaranteed. Human error, no matter how effectively they are trying to convince the target to look upon the client, might not be swayed enough.

“The most important part about loving and being loved is loving yourself first. A person that doesn’t love himself/herself cannot shine. They cannot be loved by others.” – Gong Min-young

The clients that Cyrano received were people who cannot express their love. They don’t know how or are simply too shy to make a move or confess. Cyrano helped these individuals who were not confident by being their cupids or guardian angels; they hide in the background and control the scenarios so that they are able to let their client shine in their moment. In a particular case, a client had difficulty approaching the guy she loved because she did not have enough self-confidence to even speak to him. Before the group could begin to alter the heart of the target, they had to first change the heart of the client to love themselves before they could even begin to love someone else or allow themselves to be loved.

Moving on from Past Love:

“Nothing happens by mistake, it was all meant to be…You never know who you are going to end up with” – Gong Min-young.

Occasionally, people can get caught up in their first loves. Even though they are over, they are not able to forget the memories, and that stops them from being able to love another. This struggling to let go off the past not only was shown through the clients but through some of the main characters as well.

Love Personified: Love was without a fail the main theme of this drama, and it was able to expand on the different levels and ranges of loves with the numerous examples. Love was occasionally personified, and Byung-hoon gave it this negative strength to show how powerful love can be to an individual; it could either make or break someone.

“The most powerful venom in love is false hope” – Seo Byung-hoon.

“There is no vaccine for love; you can never have immunity for it” – Seo Byung-hoon.

Dating Agency: Cyrano was a cute drama. In some moments it blew away my expectations with great acting or an amazing line/scene. But then on other occasions it left me with a sense of disappointment. It’s the kind of drama that one can watch casually, but doesn’t leave you at the edge of your seat wondering what is going to happen next. And in some ways that’s kind of its charm; that this drama is so laid-back and quirky in its own way. It’s portrayal of love was so diverse and refreshing, and with the initial plot of having a dating agency that makes their love come true, it lived up to the creative freedom it was given.