The mouth can lie, but the mind can’t.

Park Soo-ha is a high school boy who has the unusual ability to read people’s thoughts by looking into their eyes. He develops this ability after getting into a car accident with his father at ten years old, the same accident where he witnesses his father’s brutal murder. His father’s death is originally thought to be caused by the accident until a young girl, Jang Hye-sung, comes forth as the scene’s only credible witness. She points out the killer, who then retaliates by threatening Hye-sung with a promise that he will kill again once freed from prison. Feeling gratitude and indebted to the girl, young Soo-ha vows to protect her from all danger. Eventually the two are separated, leading Soo-ha to spending his life in search of her in hopes of continuing his promise.

Main character Park Soo-ha is played by Lee Jong-suk. Because of his traumatic past and his secret skill, the quiet Soo-ha remains distant from his peers to keep from drawing too much attention. Past experiences have shown him that people only treat him like a monster if they find out about his strange gift. Filled with an immense sense of loyalty, Soo-ha spends ten years looking for the “noona” who saved his life and brought justice to his father.

Lee Bo-young plays Jang Hye-sung, the “heroine” of Soo-ha’s dream. She has a not-so-pleasant personality – stubborn and prideful with a prickly attitude making it difficult for her to interact with others. She was wrongfully expelled from high school, and lived a life of poverty with her single mother. As a result of the hardship, she studied diligently, eventually becoming a lawyer so that she would never have to worry about money again. Even though she is good at what she does, Hye-sung lacks passion and motivation, opting to become a public defense attorney only to gain the benefits of a government job. 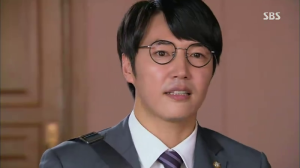 Cha Gwan-woo, played by Yoon Seung-hyun, is a policemen-turned-lawyer with office practices completely opposite of Jang Hye-sung. He shows 100% dedicated to his job, trusting his clients to a fault. Friendly and polite with everyone he meets, Lawyer Cha shows the humane side of the justice system. He tries his hardest to get Hye-sung to go on the path of honesty, not just money and glory. Seo Do-yeon, played by Lee Da-hee, is the long-time enemy of Hye-sung. The two girls were once classmates until Do-yeon and her friends caused Hye-sung’s expulsion.

Since Do-yeon also turned toward a career of law, the two often meet at the courtroom, battling out their own personal vendettas against each other as a prosecutor and public defense lawyer. And because she is a prosecutor, she is often skeptical towards others and their ability to tell the truth. She is very cold, ridged, and professional, resisting emotional attachment to cases with unusual circumstances.

Min Jong-gook, played by Jung Woong-in, is the antagonist of the drama, the obvious villain since he was the one who killed Soo-ha’s father. He was a simple food cart owner until boiled up anger from his wife’s unjustified death caused him to lash out at Soo-ha’s father, sequentially beginning the dramatic turn of events for Soo-ha and Hye-sung. Their futures changed the night of the accident, causing all three of their fates to become intertwined in a deranged battle of revenge. Min Jong-gook is smart and calculating; with an acting ability that convinces everyone of his innocence.

“If you are confused whether to tell or not – telling the truth is the right answer. That’s the right thing to do.” – Lawyer Shin

Lies and honesty are huge factors in this drama. As a lawyer, Hye-sung’s job is to determine if someone is lying or not and to defend them. And with his ability to read minds, Soo-ha becomes continuously exposed to the truth. Throughout the drama, the two are constantly thrown into situations where lies are told to cover up a painful truth. The story proves that despite how painful they can be, even the most difficult truth is always better than the exposed lie.

“An eye for an eye, a tooth for a tooth. If we live that way, all the people in this world would become handicapped.” – Eo Choon-shim

Revenge is one of the strongest motives for wrongful action. Some kill for love or jealousy, but revenge comes from anger. Yet it may also come from a morally honorable seed – for example, the need to avenge someone you love that was hurt, deceived, or scorned. People who act in revenge seldom do so for themselves, but for someone close to them. Nonetheless, such strong sentiments toward justice can develop and form from a dark place – a place of anger and hate that takes over “pure” intention and transforms it into malice. It changes the person, making their moral compass switch routes and leading them on a path of self-destruction. Both Jong-gook and Soo-ha have reasons for revenge, as their love ones were taken from them unfairly.

Rotating Door: When stressed, Hye-sung has a habit of heading to rotating doors outside either her office or courtroom. She is often cornered with making hard decisions, ones that don’t necessarily affect her as much as the clients who would spend their lives in jail if she didn’t win their case. Overwhelmed by the pressure, she is often soothed by pushing through the rotating door over and over again, spinning in circles and causing everyone to look over at her strangely. The physical dizzying motion appropriately mirrors the dizzying thoughts going through her mind at the time. Somehow the two seem to cancel out, allowing her to focus and gather the thoughts needed to make a confident decision.

Spoilers (Do not read if you don’t want this drama spoiled for you. You have been warned!)

‘I Hear Your Voice’ is one of the best dramas I have seen in a long time. It had me at the edge of my seat and sent me on a whirlwind of emotions. The storyline, the acting, and the balanced pace is executed perfectly. Soo-ha also became my favorite role with Lee Jong-suk, boosting him up even higher on my favorite actors list (making my only sadness be that Kim Woo-bin doesn’t make a surprise appearance). I highly recommend this drama to everyone, and I hope that more screenwriters take note of its success and produce high-quality works such as this one.