Beautifully scripted and delightfully enacted, Sword and Flower was a moving melodrama placed in a historical setting. 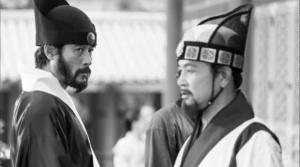 Also known as “Blade and Petal”, this drama recounts a story of two major political dynamos at odds with each other at the end of the Goguryo* period in Korean history. The pacifistic King, Yeongnyu, believes that war with the Tang (Chinese Dynasty concurrent with Goguryo) will be the death of the “flower” (the people). The top military general, Yeon Gaesomun, believes that military strength is the only way to save the people, and that meeting the Tang head-on is key to the survival of the Goguryo Kingdom. He sees the King as weak and fears for the safety of the people. Each man firmly believes that what he desires is best for the people. Caught in the middle, in a Romeo and Juliette-like dilemma are the children of the two great men: Princess So-hee and Choong, the illegitimate son of the general. In a drama fraught with crossed-purposes and misunderstood objectives, the young people fight to protect the principles important to them, as well as the people they love.

While filled with action and drama, the pace moves a little slower in Sword and Flower, allowing time for plot development, character development and historical background. The tempo befits the drama, however, and as the episodes progress, the drama becomes engrossing. An intriguing aspect of this story is that it does not attempt to create “good guys” and “bad guys” in the typical fashion of many dramas, but instead focuses on the difficult questions decisions intrinsic to leadership. 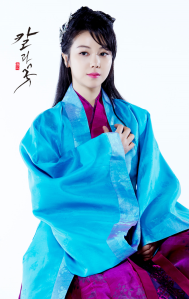 Kim Ok-bin (Over My Dead Body, The Front Line) was Princess So-hee, also known as Moo-young when she infiltrates the enemy camp as a young male warrior. She’s the kind of heroine every young woman admires: faithful, filial, loyal, and can sword-fight with the best of them, as well. As the eldest daughter, she was more than strong enough to be a good ‘king’. After witnessing the assassinations and degradation of her father and brother, she became the leader of a cause. Kim Ok-bin combined intelligence, strength and femininity to create a character

that was more than appealing enough to garner the attention of the men around her. Her charisma was necessary and credible.

Yeon Gaesomun’s illegitimate son, Yeon Choong craves recognition by his father. Unfortunately, his father’s agenda is at odds with the plans of the woman he loves and has pledged to protect: the Princess So-hee.  Uhm Tae-woong (7th Grade Civil Servant, Man From Equator), while quiet and subtle in his acting, was powerful as the talented warrior, fighting an inner battle with himself at every crossroads. The chemistry between the two central characters was palpable in its authenticity.

Choi Min-soo (Faith, Warrior Baek Dong-soo) was the dark, somber, powerful Yeon Gaesomun. For a character that was, by all intents and purposes, a stoic who showed no emotion for others to witness, Choi was remarkably talented at broodingg looks that conveyed more than words.

Kim Yeong-cheol (Innocent Man, IRIS) brought King Yeongnyu to life. Believing that war would be the death of the Goguryo Kingdom he advocated for a peaceful, diplomatic relationship with the Tang. He had great affection and respect for his eldest daughter, and feared the powerful military hero, Yeon Gaesomun. The character was portrayed with great dignity and empathy.

On Joo-wan (Natural Burials, Twelve Men in a Year) had the difficult task of playing Jang, nephew to King Yeongnyu, and a man without his own power base. Used and disparaged by the King, despite his intelligence and loyalty, he eventually betrays the King when he is passed over as the obvious choice of successor when the Crown Prince becomes injured and disabled. As in the historical records, Jang is placed on the throne (to become King Bojang) by Yeon Gaesomun, only to become a puppet king. The frustration at his position, the greed for power, and the lack of real support are all fleshed out well in the intriguing character created by On-Joo-wan.

If there was a truly evil character in the drama, it was Yeon Namseng, legitimate son to Yeon Gaesomun. The nefarious young man was brought to life in all his malevolent, bloodthirsty, maniacally power-hungry glory by No Min-woo (Full House Take 2, My Girlfriend is a Gumiho). Filled with jealousy over the attention his illegitimate brother receives and with a natural passion for physical violence, Yeon Namseng personifies the ‘bad gone badder’. No Min-woo’s soft, sweet face wreaks havoc with the viewer’s mind as he transforms from well-spoken young nobleman to rogue and scoundrel with the flash of a sword or the swing of a fist- or whip!

Lee Jung-Shin (CN Blue band member) was the KPop cameo boy, playing Shi-woo, master swordsman and bodyguard/supporter of the princess. His acting abilities are as credible as his musical abilities. As Shi-woo, he played an engaging character, loyal and passionate for the cause. The role was not as well-developed as it might have been, and I look forward to seeing this young man in more challenging roles.

Creative camera angles did much to enhance and contribute to the storytelling. A few stunts, while silly (and impossible) – i.e. the flipped upside down gaze – were charming, nonetheless. The lighting and sound were also managed and directed in a manner that enriched the story, rather than detracted.

A wonderful story combined with an illustrious cast created a drama that was a pleasure to watch. While the pace was slower than many viewers might find ideal, the tale is absorbing and the characters are thought provoking. Add to that beautiful sets and scenery and nice musical scoring and you have all the makings of a good evening in front of the television.

Goguryo*: An interesting note: “Goguryo” is the name from which the modern name “Korea” is derived.