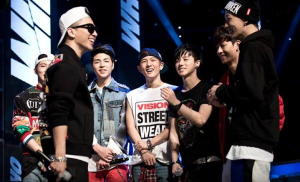 I’ve never been a fan of Korean talent shows. Sure, watching JY Park’s all-too-enthusiastic reactions on KPop Star is entertaining. And the fact that The Voice Korea got big names like Kangta and Leessang’s Gil in judges’ chairs is impressive. But the reality is you can only listen to stiff covers of 2NE1’s “Lonely” so many times before it loses its luster, and the one-per-episode elimination pattern gets redundant after a while. Despite producing many more star singers than their American counterparts, Korean talent programs have become something of a dime a dozen. But then YG Entertainment CEO Yang Hyun-suk announced the premise of new boyband competition “WIN: Who Is Next?” and things started looking a little more cutthroat.

“WIN” introduces viewers to two groups of boy trainees – Team A, a group of five with the average age of 20, and Team B, six trainees averaging at around 17 years of age. Some trainees are familiar faces recruited from previous talent programs, while others have trained under YG for years, living apart from their families with the motivation that one day they would finally debut. Both teams had no idea about the competition until CEO Yang revealed it to them in the first episode. At the end of the year, one team will be chosen by viewers to debut under the name ‘WIN’. The other team will be disbanded, some returning to training and others losing their contracts entirely. The trainees that had once practiced alongside each other are now teams put against one another. The stakes are high, and knowing that the YG is preparing to pull the plug on some hard-working trainees’ dreams is as torturous to watch as it is addictive.

What initially drew me into the competition was the sheer talent of YG’s rapping trainees. Surely if you’re sharing a label with the likes of GD&TOP and Epik High, being able to rap and rap well is something of a prerequisite. The most buzzworthy rapper is Team B’s 18 year-old leader B.I. Far before being recruited as a trainee, B.I first got a taste of fame collaborating with MC Mong for the 2009 single “Indian Boy”. Now a teenager, his experience and confidence have given him wisdom enough to lead Team B, both producing tracks and choreographing for the group. Team A leader Song Mino is also a rapper worth watching. At 21 years old, he grew up in the underground hip-hop scene with idol rapper Zico. Like Zico, Mino was originally going to debut with Block B before alleged contract issues. Seeing B.I and Mino battle it out as both talented rappers and disciplined leaders is such a huge element of the show, as it seems like the moment you prefer one, the other does something that resets the bar.

The presence of former talent competition contestants also makes the show exciting. Over the summer, Superstar K2 semifinalist Kang Seung-yoon already enjoyed a solo debut through the company. However, on “WIN”, he trades his acoustic guitar in for a studded snapback and performs as a member of Team A, creating quite the juxtaposition. Seung-yoon could start off an episode preparing for a solo stage on M Countdown only to end it completely failing CEO Yang’s expectations for the month’s group assessment. Team B’s Koo Jun Hoe started off as just another contestant on the first season of KPop Star before being picked up by YG after the ending of the show. Having already faced public rejection on a previous program makes being a part of “WIN” an all-too-familiar scenario for him, something CEO Yang reminds him of throughout the program. In fact, having such past experiences is a constant theme for both trainees, a source of both anxiety and motivation during team challenges.

The changing themes keep the program varied and interesting. In addition to learning about the different trainees’ talents and backgrounds, the show begins each episode with a new challenge for both groups to work on. In one, Yang Hyun-suk brings in Taeyang and G-Dragon as coaches to each team, working with the trainees directly and teaching them a routine to present in competition at the end of the episode. In another, the teams meet with trainees from JYP Entertainment, battling it out through vocal, rap, and dance performances in something of a ‘label war’. The challenges in “WIN” take the otherwise well-honed trainees out of their comfort zone, often resulting in both new highs and new lows for the competing teams.

Personally, I love Team A’s mature image as much as I love Team B’s wild image. When watching an episode, I always envision how great it would be if YG just debuted them as one giant part-B.A.P, part-EXO supergroup. The response so far from viewers seems pretty split down the middle, but with good reason. It’s hard to see such promising talents and know that some of them won’t get a chance to debut. The optimist in me won’t rule out a twist ending, but of course, only time will tell. In the meantime, stay strong, fellow “WIN” viewers. As for Teams A and B, we’ll see you at the finish line.

US Fans: MNET offers full episodes of “WIN: Who Is Next?” on their official YouTube Channel complete with English subtitles. Check them out here.

One thought on “[BIBIMBEATS] Why We’re Obsessed: What to love about YG survival showdown “WIN: Who Is Next?””