Korean hip-hop is finally beginning to gain the foothold in the United States and Canada that K-Pop has long held. Epik High’s well-deserved popularity has paid off for stateside fans who were finally granted a tour spanning major metropolitan areas across the continent. From Dallas to Vancouver, and Toronto to Atlanta, Epik High’s 2015 Tour expanded on the trail normally paved by Korean musicians who tour in North America.

Near the western edge of Koreatown in Los Angeles lies The Wiltern Theater, host of Epik High’s second stop on the tour. Hours before the concert doors opened, fans were lined up around the block, awaiting a performance showcasing most of the group’s hit songs, and a few lesser known tracks like “High Technology” which left many fans unfamiliar with the lyrics.

The show was electrifying from the first note to the very last. Dumbfoundead, a Korean American rapper native to LA’s Koreatown, pumped up an already exuberant crowd of several thousand. As Epik High proceeded to the stage, fans were ecstatic that their long wait for a live performance was about to end. Comical moments with DJ Tukutz’s dancing and Tablo teasing Mithra about his single life broke up a long list of hits.

Fans and media in the front sections spent almost the entirety of the show avoiding the destructive forces of water flung from the stage. Though this writer is still stinging from the interruption of the song “It’s Cold” halfway through for more upbeat songs (a trick technical difficulty used throughout the tour), the group redeemed itself by closing out the show with “Don’t Hate Me” during the encore.

Overall, the concert was a smashing success. After speaking with a few fans, only one question for Epik High remains. When will they come back? 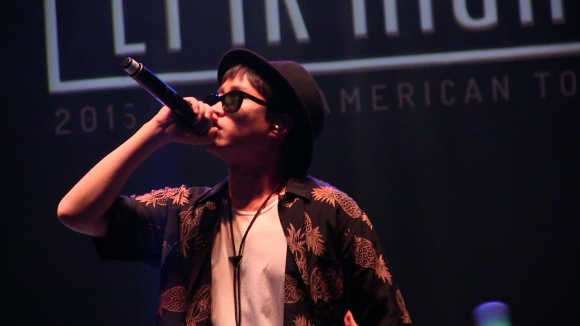 About writer: Mandy Day is a native San Diegan and Korean Culture writer for Korea Daily. She organizes the San Diego Korean Language Exchange and hopes to move to Korea to teach English in the coming months. Someday, she hopes to utilize her education in Public Policy and East Asian Studies toward a rewarding career in public service with ample opportunities to travel.

Eight years after their debut, Korean rock band F.T. Island finally brought their tour to the U.S. The band has played stateside before, but 2015 marked the first year American fans could see one of South Korea’s most popular bands headline their own tour. Playing two stops in the U.S. to close out the FTHX Europe and Latin American Tour, several thousand fans rocked Los Angeles’ Club Nokia with the five band members and special guest, Jamil, an American born Japanese singer.

The band’s hits, like “Love Love Love” and “I Wish” anchored the concert while the group promoted their newest album, due out in March or April. Over the years, the band has gained more autonomy over the direction that their music takes. The days of bubbly pop rock are waning and the band is choosing to take their sound in a new, edgier direction. Fans of F.T. Island have stuck with the band throughout the years and their base has grown to include music lovers with a hard rock bias. One fan in attendance took a bus from San Jose, California to see the group. Journalists representing Spanish language media were also in attendance to cover the event for Mexican and Latin American based K-Pop listeners.

Lee Hongki, the lead singer and noticeable favorite among attendees, played the near two-hour show without missing a note, despite being afflicted by an illness. The venue was on the smaller side compared to recent Korean concerts, and lacked the fancy choreography of recent L.A. performers, 2PM and Jay Park. Opportunities to see Korean bands perform with live music as opposed to pre-recorded instrumental are few and far between. F.T. Island’s intimate show on a slow night at Downtown L.A. Live didn’t disappoint.

Mandy Day is a lifelong San Diego resident and made her way back home after finishing a Bachelor’s Degree in Public Policy at Mills College in Oakland, California. She has traveled extensively in Australia and lived in Cairns for a year while studying Journalism. Along with travels in Europe, Mandy is passionate about adventuring to far flung lands and hopes to make a move to South Korea in the near future to teach. An avid fan of K-Pop and Korean dramas since 2010, Mandy has studied East Asian History since high school and currently organizes the San Diego Korean Language Exchange.