I was just your average, recently unemployed American woman, wandering into the family room when daughter #2 (age 14) asked me watch a Korean drama with her: “Boys Over Flowers”. Really? A Korean drama? I’ve never been into soap operas, and to watch one with subtitles just did not appeal. But, having nothing better to do at the moment, I sat and watched. 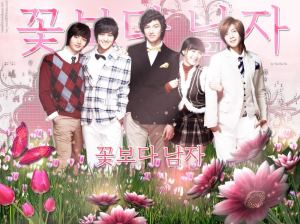 Hmm. Nice looking young men. Feisty, strong female lead. Funny dialog. Not bad. The episode ended and daughter #2 got up to leave. “Wait! Where are you going? Aren’t we going to watch the next episode?”

And with those words, my life as an average American housewife ended.

Some 80-odd Korean dramas and movies later and an I-pod filled with K-pop music, my life is not what it used to be. Korean dramas (Korean music, Korean food, and Korea in general) have become something of an obsession for me. Now admittedly, still unemployed, I have plenty of time on my hands to obsess. I like to think I’m putting the time to good use.

Why should I write about dramas?

I am a born enabler. I love sharing my enthusiasm with others. You’ll find me somewhat less critical than many because I have no difficulty enjoying a drama for what it is meant to be. I do not expect every drama to have the depth and breadth of “Deep Rooted Tree” nor do I expect an actress playing an annoying character to be anything less than annoying.

I thoroughly enjoy the cultural insights and sharing them with others. Non-Koreans may have difficulty (especially in the beginning) understanding the dramatic tension and angst of certain situations.  An explanation of cultural differences might bring new insights to the drama that may have gone unnoticed or might explain a situation that seemed unlikely.

My plan is to review the dramas I have watched and give each a rating, from 1-10, in the following areas: Storyline/Synopsis, Acting/Script, Cinematography, Music and Overall Charisma. Of course I also hope to share a few insights into cultural differences I have picked up on along the way that might help clarify a situation or maybe spark a discussion?

I love suggestions, feedback, comments and friendly criticism. I completely ignore blatant flaming. Is there a drama you would like to see reviewed sooner rather than later? Let me know in the comments or e-mail me at cadawley@earthlink.net.

Want to see a list of what I’ve seen and am currently viewing? Here it is! Talk to me!

Cheryl Dawley holds a Bachelor’s Degree in Chemistry, an Associate’s Degree in Psychology and is currently working in neither of those fields. She has worked in Research Science, Chemical Hygiene, Software QA, Office Management, Religious Education and considers herself a Jack-of-all-Trades.