An overview of top songs from this year so far and at April’s upcoming releases.

Unbelievable, it’s already 4 months into the New Year! At the start of each year, I always anticipate what kind of music will be released and after last year’s success for Kpop I am even more thrilled to hear what’s to come. So far this year, we’ve already seen many great music releases that I am eager to update my iPod with. 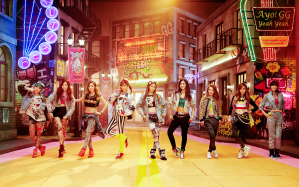 The year started right with SNSD’s ‘I Got a Boy’, their first Korean single in over a year. They broke free from their usual girly and innocent concept and instead showed a mature, hip-hop style. While the song may not appeal to everyone’s tastes with its dynamic sounds and verses which reminded me quite like a musical, it was very visually appealing and the choreography was more complex.

One of my favorite soloists currently is the young and great Lee Hi with her song ‘It’s Over’. This jazz-style song is completely addicting and unlike typical pop songs today. I definitely predict that this 16 year old talent will have a long successful career and contribute great music to Kpop. If great vocals from a solo singer and a soulful sound aren’t your taste, then you just can’t deny the video of this song is entertaining with the adorable dancing bear.

Boy group Infinite finally returns with their recently released song ‘Man in Love’. Trying something new from their usual cool and edgy style, they finally cave into the cute concept. Infinite from the get-go has always had such charismatic looks and a unique quality which I think this song delivers. What I enjoy most about them is that even if this is a different concept from their previous songs such as ‘The Chaser’, it doesn’t seem out of place and maintains their distinctive style. Occasionally when a group modifies their style to maintain
the appeal of fans, they seem to lose the quality which we love about them and appear as just a product being rebranded and sold. This on the other hand just has that “Infinite” feel to it.

Amongst all the songs from these past couple months, I’d have to say my personal favorite so far is from hip-hop trio MFBTY (My Fans Better Than Yours) and their song ‘Sweet Dream’. I’ve always been in love with collaborations, trios and duos such as Infinite H or TaeTiSeo because they have the opportunity to experiment and delve into other styles. This collaboration features hip hop masters Yoon Mi Rae, Tiger JK, and Bizzy in this upbeat song which is certainly not to be defined as Kpop.  As someone who enjoys listening to a variety of genres, I recommend this song to anyone interested in broadening their Korean musical tastes, and especially looking into each of these artists’s solo work. ‘Sweet Dream’ is definitely a song I’d like to blast while cruising around with friends over the summer!

Expected to make a comeback to the music scene within this month is Psy, who has diligently been working on his next song to prove he isn’t a one hit wonder in the American market. People all around the world are anticipating his next song with the hopes that it will be on par with the success he garnered from ‘Gangnam Style’. Other artists who are reported to be returning this month are 2pm, with their long-awaited comeback since nearly two years ago, EXO, SECRET, 4Minute, and Shinhwa, who will be releasing a new album for their 15th anniversary.