Anticipation builds as the “Countdown to Lee Min Ho” continues. March 10th is coming up soon! I see no has has come up with any great gift ideas. Thanks. 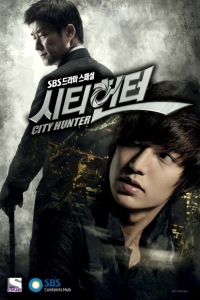 “City Hunter” is Lee Min Ho’s big Action Drama, proving that Romantic Comedy is not the only genre for which he is well suited. City Hunter, the modern day Hong Gil Dong, righter-of-wrongs, dark hero and wounded vengeful soul, is the hero of an action-packed Korean adaptation of the Japanese novel by Tsukasa Hojo.

The story begins with high impact action and drama and seldom slows down. The drama literally opens with the Lee Yoon Sung’s difficult birth and goes on to tell the story of how the country’s highest officials betray his father and his father’s fellow elite soldiers. Lee Yoon Sung (Lee Min Ho) is kidnapped as an infant after his father’s death by his father’s best friend, Lee Jin Pyo (Kim Sang Joong) and is brought up as part of an elaborate revenge plan against the government. Episode 1 is jam-packed and lays down a sound foundation for the storyline that follows.

The adorable love triangle between Kim Nana (Park Min Young), Lee Yoon Sung and Prosecutor Kim Young Joo (Lee Joon Hyuk) is pure entertainment. In the beginning, Young Joo manages to stay one step ahead, much to Yoon Sung’s frustration. The acrimonious relationship between Yoon Sung and Young Joo evolves and matures throughout the episodes into an complex and interesting connection. The interaction and development of their characters is one of the better side stories seen in recent dramas.

The surprising twists that develop in the last few episodes are worth watching for.

Lee Min Ho and Park Min Young worked quite well together as the main duo. Lee Min Ho successfully created a difficult character: driven for revenge, yet reluctant to kill, skilled at manipulation, deception and seduction, yet pure in motives and desires. While Park Min Young’s character did not require the same depth, the consistency of a well-acted part throughout drama was commendable.

My favorite giraffe from ‘Running Man’, Lee Kwang Soo plays Go Ki Joon, who is, as usual, a socially inept but loveable character. Seasoned, veteran actors galore are strewn throughout the cast as the 5 ‘villains’ and Lee Yoon Sung’s poor, pathetic mom and others. In fact, for the most part, this is an ‘all-star’ cast.

The story lost some of its energy in the last episode, as the last of the 5 conspirators is due to be brought to justice. I feel the problem is due in part to the fact that viewers empathize with this particular cohort and are loathe to see him brought down too far. Sympathies began to swing against our hero, at least for me, which made for troubled viewing.

Drama clichés spotted: dead parents; obligatory shower scene (really, who’s complaining?); in some respects it’s still a poor girl / filthy rich guy, but that’s certainly not the point of the drama; and is it me or is it becoming a thing for Lee Min Ho to wash and /or dry his woman’s hair?

Well-choreographed fight scenes, amazing action stunts, and cool settings (the Thai jungle?) all factored into to a viewing experience that proved worthwhile. The masterful use of lighting make many scenes more than memorable. And it’s not just Lee Yoon Sung who gets to fight with the bad guys and drop from high buildings – Kim Nana’s got some serious moves! Ninja girl!

Lots of good music in this OST, including some really great instrumentals – “Nana’s Theme” being my favorite. It’s a soft, slow, piano take-off on “Cupid” (see below): http://www.youtube.com/watch?v=FG-XOlQ2pcQ

As for the vocal pieces, we have:

Great Ballad: “I Only Look For You”  Park Gyuri  http://www.youtube.com/watch?v=_rFEdaJustw

“I Love You, I Want You, I Need You”  Apple Mango http://www.youtube.com/watch?v=8QMwVksgu0I

“I Love You, I Want You, I Need You (Sweet Acoustic Version)” Goo Hara http://www.youtube.com/watch?v=g1Njid41Rp8

Various versions of “City Hunter” are currently available on iTunes.

While ‘City Hunter’ is not my favorite action drama, it is definitely a drama to put your must-see list. I give it well above average marks in cinematography, music, acting and script. The overall feel of the drama is also very good with the viewer anxiously anticipating the next episode, rooting for antagonist and protagonist alike, feeling angst over the inevitable unfairness of life. Heavy sigh.

However, despite the charisma, I found myself emotionally unmoved until the second to last episode. I’m not sure if the characters lacked the compelling nature required to really draw me in or if the script itself lacked the dramatic appeal or force necessary to command my emotional response. The ending is also somewhat weak in relation to the strength of the rest of the script.

That said, I have watched this drama three times, so the previous statements have not lessened the overall appeal for me to the extent that it has prevented multiple viewings!

And really, where else are you going to see Lee Min Ho riding an elephant? 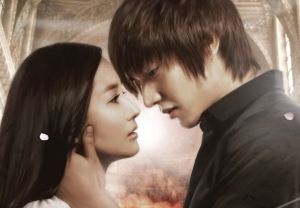