K-pop this year has already made so many comebacks. In March, there are many “spring” themed music videos, which means….pastel pants, beautiful scenery, and cute male and female artists, bringing out the “aegyo” they kept away during the sorrowful winter ballads.

Note: This chart is just my personal favorites and does not reflect any music video views or digital/album sales.

Rookie singer Lee Hi returned to the K-pop scene after her success with her debut track “1,2,3,4” with a cute music video that matches her young age. “It’s Over” is full of fresh pastel outfits, funky headpieces, stuffed animals and of course the highlight of the video being a giant blue teddy bear that symbolizes the boy Lee Hi is breaking up with (and that bares an awfully close resemblance to fellow YG artists, GD and Taeyang. A mere coincidence? I think not). And while I am not a huge fan of the jazz/soul music, Lee Hi defiantly knows how to belt out those low notes that leaves me speechless. 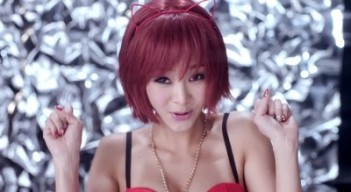 Sexy icon G.NA returned once again with her latest single “Opps” as a…cat? (That’s right, because what’s sexier than a black cat). G.NA plays a cat that turns into a human when her handsome male owner goes out during the day. She dresses up and heads out to a club where he is at and they catch eyes, instantly feeling a connection. But before he can get too close she hurries back to change into a cat once more. By far, this is G.NA’s strangest music video (I’m even including the weirdness of the bodybuilder firemen of “2Hot” and this beats it). However, the song is cute without sounding overly sexy. And of course, before realizing all of this I spent the first couple of times watching this acting like a fangirl over BtoB’s Ilhoon who was featured in the song and music video for rap portions.

Pop-ballad duo group Davichi came back with their second studio album and two music videos; “Turtle” and “Just the Two of Us” with Turtle being my favorite of the two, due to its artistic fantasy music video that was inspired by “Alice in Wonderland”. 5Dolls’s Hyoyoung starred in the music video as a pink-haired “Alice”. As soon as vintage music box was wound up from the “mad hatter”, Alice begins to explore her surroundings. Traveling through baby-pink rose portals, following a cute white bunny with a pocket-watch, and landing in a tea party, this music video follows the familiar story line but has such beautiful visuals backing it up. The song itself is sung beautifully while telling the sad tale of a girl who finds comparison in a turtle who hides in its shell from the world. 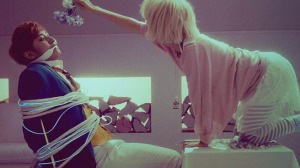 Solo artist Heo Young Saeng came out this month with “Art of Seduction” – a very eccentric music video that shows the possessiveness of fangirls. One particular fangirl had gone past the point of no return and kidnapped her precious “oppa” (Heo Young Saeng). The music video went back and forth between the fangirl’s point of view where she somehow became delusional and really believed that he came of his own free will and was gladly partaking in her couple-like activities  But in reality, it shows the same instances with Heo Young Saeng tied up and forced to please the crazy girl who kidnapped him.

Rookie group Glam came back with “In Front of the Mirror”, their new single after debut song “I like that”. And while their debut was very funny and quirky, their latest song and music video took on a more serious note. The music video shows the different members coming home; they take off their high heels, wipe off their make-up and change into some more comfortable clothing. Yet, as they do so they are sad, because in front of the mirror they don’t feel pretty and have no confidence about themselves. Glam have proven so far to be strong rookies this year.

Rania came back with a new sexy single “Just Go” and only five members once again. None the less, they still brought their sexy moves and seducing stares with their new captivating music video. “Goodbye being the new hello” as their anthem, this song because very catchy and popular with the famous butt moves throughout the chorus. 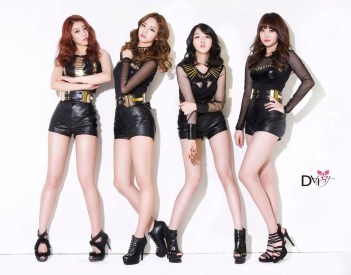 Girl’s Day made a 180 degree turn with this new comeback. Known for their over the top cute “aegyo” songs, Girl’s Day came back with a more serious note with “Don’t Forget Me” and now their latest “Expectation” has the girls giving sexy looks to the camera with their suggestive moves. But even with this drastic change, the girls pull of this mature concept with their red lipsticks and signature “suspenders” dance. The song talks about a girl who is captivate by a guy she is determined to make come after her.

2am always have beautiful music videos to match their beautiful voices, with “One Spring Day” being no exception. Yet, their ballads usually bring sorrowful messages along with them. “One Spring Day” is about a long-term couple that just broke up and the man does not know how to get over this break-up (because he still cares deeply about the girl he was with), and decides that he has to leave behind the memories and traces of her in his life. This music video stands out among the rest for being a “spring” themed video with snow falling. 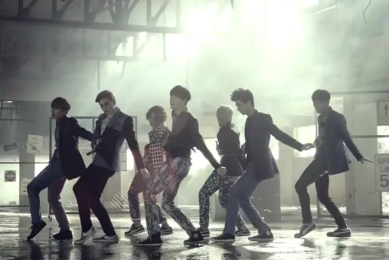 Underrated U-Kiss came back once more with “Standing Still”, the title track to their third full length album. A simple dance music video in which the U-Kiss boys are homeless (once again) in an abandon building, in agony over the girl who is just watching him burn (figuratively, not literally!). The song, dance and music video are all simple in comparison to U-Kiss’s previous work but the song still finds a way to get stuck in my head at odds times of the day. And this was the song where member AJ returned after taking a six month break to study in the United States.

Number one on the charts and number one in my heart ( shh, don’t tell Shinee and U-Kiss…), Infinite came back with “Man in Love”. And if you could not already tell by the title, the song and music video both portray young men in love; from waiting for a text message, to planning a surprise event, to buying her gifts or making her food, the boys show cute ways that they would please the ones they are in love with. the song fit perfectly with the rest of Infinite leaving them with their very consistent track record. The dance group did not fail to disappoint with another great, complicated dance, and in the traditional K-pop style had funky clothing, weird hats and pastel pants. Oh yes, and there was an adorable kitten that rivaled the boys as being the cutest character in the music video.