I really don’t watch as many Korean movies as I should and I don’t know why. The instant gratification factor is sure there, so when a friend recommended that I watch “Oldboy”, a 2003 psychological-mystery-thriller directed by Park Chan Wook, I decided it was time to expand the old horizons again. Watching “Oldboy” comes at a great time because Spike Lee is set to release a remake October 11 of this year (according to IMDb, which couldn’t be wrong, right?), starring Samuel L. Jackson, Josh Brolin and Elizabeth Olsen. It’s always a good idea to watch the original first and in this case, the original is a must-see. But please, adults only, yes?

Oh Daesu is pathetic drunkard who can’t even make it to his little daughter’s birthday party on time. After being bailed out of jail by a friend, he is mysteriously kidnapped, framed for murdering his wife and locked up in a room with nothing but a television for companionship for 15 years. As mysteriously as he is kidnapped, he is suddenly released. He now has 5 days to find his captor and seek revenge.

Disturbing. Voyeuristic. Violent. Intensely visceral. “Oldboy” contained amazingly gory scenes that made the viewer cringe, but were completely necessary to the plot. This is by far the most sexually explicit Korean film I have ever viewed, but there was nothing gratuitous about the sexual content. Every dark, gritty scene was critical to the development of the story. The script is intense and well written. Although there are many gruesome parts (it may be awhile before I can go back to the dentist and eating octopus is totally out), the overall feel is that of a fast-paced mystery thriller. The timing throughout was extremely well done, providing a few ambiguous clues here and there, allowing the uncertainty to deepen.

The storyline was attractive not just because of the characters, and certainly not because of the brutality, in and of itself, but due to the ability of the writer to honestly depict human nature. The disturbing qualities avoided creepiness by being genuine. The idea of a revenge fantasy is common to human nature, so the concept appeals at a visceral level, but the intensity at which the fantasy is played out is what makes “Oldboy” a satisfying, if sadistic pleasure. There were scenes that touched something much deeper within, as well. Just after Oh Daesu is released he saw his first human being in 15 years, a man about to commit suicide. The momentary intense, physical interaction between the two conveyed all the anguish of 15 years of no physical contact, unbelievable yearning and disbelief in his own senses.

The movie was deliciously surprising at all turns. The ending was delightfully ambiguous. In no way did the ambiguity detract from the finale – the ending was perfection. 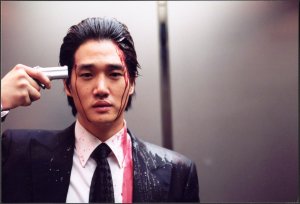 How do you play a half-mad man imprisoned for no apparent reason for 15 years? Choi Min Sik made is work Oh Daesu in such a convincing manner that it was easy to get wrapped up in the story. He apparently went through a grueling routine of gaining and losing weight, depending on the film schedule in order to create an authentic character. Kang Hye Jung played Mido, the young girl that Oh Daesu falls in love with after his release. Her vulnerability contrasted sharply with the psychotic violence rampant around her. The evil mastermind behind the imprisonment was Lee Woo Jin, played by Yoo Ji Tae. The alarmingly creepy voyeur of the film, Yoo Ji Tae finessed smaller the role into something memorable. All parts, major and minor, were credible to the extreme. It was impossible not to become invested in the characters created.

The cinematography is very edgy, so much so that I have to remind myself that this is a 2003 film. Scenes are very bold and brutal. Filmed with a take-no-prisoners attitude, viewers are left stunned at every turn.

“Oldboy” is more of a powerful experience than a movie – a dark, throbbing, enigmatic, primitive experience. A film that makes your pulse race, your eyes bulge, your thighs twitch. The grit of this movie appeals at an instinctual level, entangling the viewer in its demented web. While I know this won’t be everyone’s cup of tea, the fact remains that it is a brilliant piece of film making.

It will be interesting to see what Spike Lee does with this film. Good luck, man. 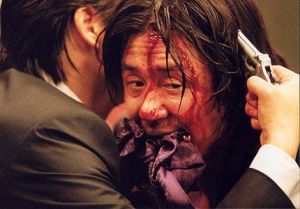