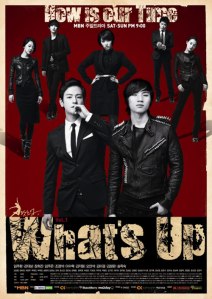 And on to the genre of Musical Dramas.

An absolute sleeper of a drama, “What’s Up” definitely has some great vocals, given that Kang Daesung, main vocalist for Big Bang has a starring role. Due to an unusual number of setback and struggles, the drama was finally aired months after the final episode was produced, but with a notable lack of fanfare. To this day, the drama is relegated to the discount bin, forgotten and unseen by most. What a shame. Well worth viewing, “What’s Up” was robbed of the accolades it richly deserved.

Unlike other musical dramas whose plot-lines are thinly constructed covers for the music they purvey, “What’s Up” features a real plot, real characters and a story worth following. And for good reason, too: well-known script writer Song Ji Na stretched her wings and wrote something for young people. A variety of misfits find camaraderie, love and purpose as they struggle together through their first year as students in the Musical Theatre department of a university.

Ha Do Sung (Daesung) is the shy, hidden child of a politically connected woman. Seething with natural talent, he yearns for the approval he knows he can win from appreciative audiences, much to the dismay of a family who want to hide him as a shameful secret. Jang Jae Hun (Im Ju Hwan) has a chip the size of Montana on his shoulders. He’s a bit older than the general student population, having spent a few years rough-housing on the streets before deciding to straighten out his path and pursue his newfound passion – the theatre. Oh Doo Ri (Im Joo Eun) is a big personality trapped in the conformist trappings set forth by her domineering stage mother. College is her opportunity to bust loose. Eun Chae Young (Jang Hee Jin) is well known actress whose career is faltering and, before she crashes and burns, decides to take a break and go to school. She’s definitely one of the ‘cool kids’, though. Park Tae Yi (Kim Ji Won) is a character. Goofy. Scattered. Sweet. Her father is killed in a tragic car accident and she is trying to fend for herself in a world for which she’s not entirely ready. Kim Byung Gun (Jo Jung Suk) desperately wants to be a musical theatre actor but suffers horrible stage fright.

The cool guys? Teacher Sun Woo Young, for one. Played by Oh Man Suk, he comes to epitomize what we want great teachers to be: creative and caring. He does, however, have issues of his own. On the cool student list: Lee Soo Hyuk as Lee Soo Bin, songwriter extraordinaire, with a cult following all his own, even though he’s only a sophomore in college. 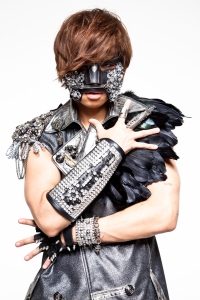 The plot is on the dark side, with main character, Jang Jae Hun, trying to escape from, and eventually atone for the mistakes of his past. The story intertwines characters’ stories in an expert fashion, bringing them to a ‘coming-of-age’ culmination that heals and redeems. The teacher, Sun Woo, in need of redemption of his own, grows and changes along with the kids in the story.
It came as no surprise that Daesung used his epic voice to belt out glorious tunes. Kim Ji Won’s voice, however, was a pleasant surprise in it’s sweet, freshness, with a beautiful alto range as well as a clear, natural soprano. Jo Jung Suk also has an amazing voice. Note, however, that as the soundtrack is mysteriously unavailable, even though the drama was released in 2011, there is no way of verifying who, exactly, sang the musical numbers in the OST.

Fun dance numbers, including a few American vintage tunes are notable. Costuming was adequately done. While nothing stood out as overtly outstanding (in terms of cinematography, that is) the general impression was one of a well-balanced, well-timed drama with focus resting squarely on character development.

For the most part, the music is Impossible to locate. Only the Daesung sung, “Lunatic” appears to have been released and is readily available.

Dub-steppy background music. I love the silly, funky music that plays whenever Park Tae Yee is Lost and/or confused.

A scene from episode 18 features a montage set to the music of “What’s Up”, The character of Doo Ri sings at the beginning and the end, but the original soundtrack (4 Non Blonde) is fused into the middle.

The OST tracklist the following music, but as I’ve stated, it appears never to have been released.

“This is the Moment”  Daesung

Despite the fact that the drama was so highly anticipated, that it had a fabulous writer (Song Ji-nah of Sandglass, Story of a Man, and Legend), and an incredible cast, it had an incredibly rocky path on its way to airing. First SBS canceled its timeslot which delayed things for a few months as the producers scrambled to find another home view time, then Kang Daesung got into the car accident that caused a motorcyclist’s death, which despite Daesung’s resultant innocent verdict, caused inevitable delays and more than a little scandal.

Regardless, the drama needs to be resurrected from the shadows and brought back out into the daylight where it belongs. 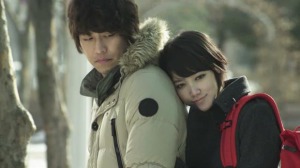