They came in droves with excitement and dreams shining on their faces and twinkling in their eyes.

Hundreds of young people cued up at Culture Shock Dance Studio located adjacent to all those great eateries in Old Town San Diego. A few had been cued up since 7 (pm, I assume!) in order to assure themselves a coveted spot on the state-of-the-art dance floor.

Brandon Labak and Vinh Chau were two of the early arrivals and their anticipation was written on their faces, in their voices and in their body language. I asked them why they were here and huge grins spread across their faces: “It’s such an amazing opportunity!” “He’s so great!”

Korean music fans will recognize the work of Lyle Beniga in the unique, dynamic choreography in “Mama” by EXO, “Where U At” and “Wedding Dress” with Taeyang and Kim Hyun Joong’s “Breakdown”, “Lucky Guy” and “Please”. To be sure, Lyle has a huge following here in the US as well and is currently busy with Justin Timberlake’s tour.

I consider myself privileged to not only witness his high-energy, authoritative teaching style, but to also have a chance to talk to the congenial man as well. So I asked him a few questions about working with Korean musicians.

Lyle: The Korean artists – the number one thing that stood out to me – they’re trained from a very young age to be performers of the art, so they have a very good discipline about them as far as learning things and picking up things.

Cheryl: So they pick things up really fast?

Lyle: Yeah. I mean, it’s still a challenge because a lot of times they’re not dancers, but it’s not impossible. They really want to learn, they really pay attention. They’re very attentive to all the little details.

Cheryl: So people like Taeyang, EXO, Kim Hyun Joong, they’ve been doing it for awhile.

Cheryl: So they must pick it up pretty fast then.

Lyle: I want to say pretty fast – some better than others, you know – but I’d say they pick it up pretty fast compared to a lot of the U.S. artists that I’ve worked with.

Cheryl: One of the things I was wondering is that in Korea the drinking and partying is really a huge thing. But these guys are basically athletes.

Lyle: (laughing) Ya – I mean they take care of their bodies. They have personal trainers.

Cheryl: So are they partying, too? 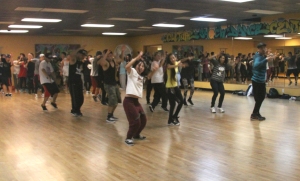 Cheryl: There’s no time to party!

Lyle: They might have a party here and there, but they party hard because they work hard.

Cheryl: So do you have any plans to work with Korean acts again, like were you involved at all with EXO’s recent comeback?

Lyle: No, I wasn’t involved in the new release. I’ve been postponing a lot of things because Justin Timberlake’s tour is coming up, so I’ve been focusing on that. But I’m sure sometime soon after this tour is up…

Lyle: I LOVE working with Korean acts. They’re all the homeys, too.

Lyle: Taeyang? He’s very humble. Very, very humble. And he is the hardest working artist that I know. When I talk about working from morning until night, that’s the person I’m thinking about.

Cheryl: So what about Kim Hyun Joong?

Lyle: Kim Hyun Joong – he’s sooo funny! He’s hilarious, he’s very charismatic and very intelligent at the same time. He knows what he wants out of his music and out of his dance – he has a hand in everything. I give him a lot of credit for putting out what he wants to do as 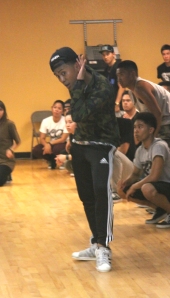 opposed to what a record label wants him to do.

Cheryl: So my “extra” daughter would kill me if I didn’t ask about EXO. She was freaking out today over the new teaser they released.

Lyle: (laughing) Oh – EXO, yeah I worked on their debut.

Lyle: Oh yeah? Oh thank you! Yeah, when working with them it was difficult because there’s two teams (M & K) so I had to think of formations for each one of them because they all have different strengths, so it’s not like I could do the same thing with both. So I feel like I was multiplying my work.

Cheryl: So did they work well together? 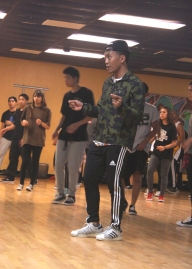 Lyle: Yeah. They worked well together. When I was working with them before their release they were just super excited. Excited because they’ve been working years and years. And I was surprised. Collectively as a team, they were the fastest to pick up choreography.

Cheryl: Which was better, K or M?

Lyle: Um. Oh man, you can’t ask that! That’s too hard because they both have strengths. I like both of them. Like one of them’s super clean and one of them has that energy and that vibe.

Cheryl: Which one’s which? 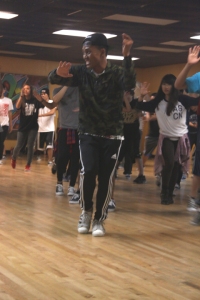 Cheryl: I’m pinning you down here!

Lyle: Yah – you are pinning me down! I tell you, EXO-M, they have the clean look. Collectively, they make the visual work. I can see it, they make the transitions clean, and it’s like, if I’m watching it, I’m enjoying it. K – even though it may not be as clean, they have a certain fire to them as far as performance. So it’s always a balancing act, give and take, finding a middle ground for both of them.

Cheryl: So out of any of those artists, do you listen to any of them personally?

Lyle: I listen to Taeyang…

Cheryl: The rest of Big Bang?

Lyle: Yeah, exactly – I love GD, his music is awesome.

Cheryl: Well thanks for talking to me, it was fun.

So I asked our young men, Brandon and Vinh, now hot and soaked through with sweat from a long workout with Lyle, what they thought. Their responses? “Ridiculous.” “Oh my gosh! Mind—blowing! I’m not going to go to sleep tonight.” OK, so they warned me they might not be very coherent after the session. They looked happy though. Tired, but really, really happy.

Here’s some information on Culture Sock Dance Studio for those interested in adding some moves to their repertoire:

Culture Shock Dance Center programs offer one of the most extensive contemporary dance programs in Southern California. The San Diego Union Tribune refers to Culture Shock as the “epicenter of hip hop dance in San Diego”. Classes include all levels of Hip Hop, Breakdance and Cardio Hip Hop. Other classes include jazz, from beginner level to advanced, Salsa, Belly-dance, Striptease, open floor Break-dance, Popping, Burlesque and House. Many of these classes are taught by working professionals, dancing, choreographing and directing in the entertainment industry. Our youth program offers 8 week sessions in Hip Hop and break-dance. 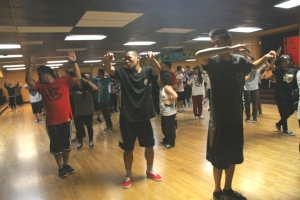 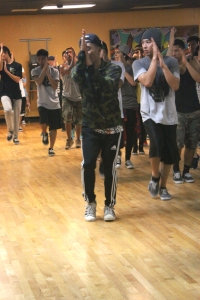 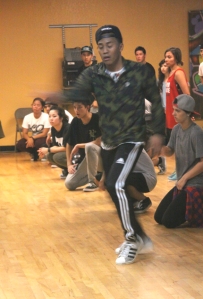 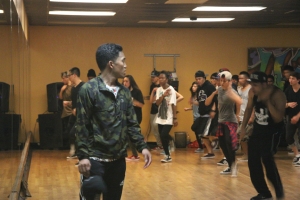