Filled with fun, penetratingly honest girlfriend-time conversations, “I Need Romance 2012” hits the spot for those looking for a drama with romance, humor, and yes, I’ll say it, a bit of steamy sexiness.

The scenarios strike pretty to close to home with the abrupt, honest portrayal of human romantic relationships. No perfect, sweet, innocent love relationships here. Twisted, real, gritty, and sometimes a bit too close to the mark to avoid personal comparisons. Ack.

Yet, the basic story concept is fun, if not entirely new: women in their early thirties looking for love – sometimes in the wrong places. Of course. How else would we find comedy in pathos? And is it not every woman’s secret fantasy to have two fabulously sexy men vying for your lasting affections? I‘ll admit it even if you don’t! Oooh la la!

OK. There’s no deep, transcendent plot–line here. But hey – it’s a romantic comedy! I thoroughly enjoyed “A Gentleman’s Dignity” for many of the same reasons.

Here’s a fun trailer tvN put out. It has little to do with the actual drama, but I enjoyed it, nonetheless, as it accurately portrays the spunk and fire of our lovely ladies in a tongue-in-cheek play on American comedic drama.

Yoon Seok Hyun and Joo Yeol Mae are childhood sweethearts – and I do mean childhood. Their parent parents were friends and built a duplex with a shared kitchen and dining space when the two were 5 years old. When Yeol Mae’s parents passed away in her late teens and Seon Hyuk’s parents and his younger sister moved to the country, the two continued living together in the pretty little house with two golden retrievers playing in the yard. Their romance began in high school. Despite their stormy, on-again, off-again relationship over the years, they remain housemates and friends.

Fortunately for Yeol Mae, she has two best friends since middle school in whom she can trust, rely on, confide in and commiserate with. The three, now in their early 30’s, all have love-life challenges that keep the story intriguing. Interestingly, Seok Hyun is included in the group as the go-to guy friend who can be relied upon to give good advice from the man’s point of view.

When our story begins, Yeol Mae and Seok Hyun are in “off-again” mode. Sun Jae Gyung and Woo Ji Hee, the besties are both in less-than-ideal relationships as well, although on the surface they look great. Their love lives all become complicated, especially Yeol Mae’s, who suddenly finds herself being pursued by a man (Shin Ji Hoon) who promises to fulfill the desired affection she’s been craving, but Seok Hyun refuses to satisfy.

Lee Jin Wook plays Yoon Seok Hyun, a somewhat more realistic man, in my opinion, than the sweet, empathetic, romantic heroes portrayed in most romantic comedies. Not one for over-the-top romantic gestures, Seok Hyun does not even want to get married. He has difficulty expressing emotions – especially love – but that does not stop him from being loving in his own, manly way.

It was nice to see Kim Ji Suk play something other than a conniving, sleazy character. (At least, that’s all I have ever seen him cast as…) In his role as Shin Ji Hoon we were able to see him as a strong, sweet romantic (JiHoo*-like) guy worth swooning over. Somehow, this persona seemed to fit him quite well. (Hey – it’s a K-Drama – there had to be one guy that fit the standard ultra-romantic profile.)

Jung Yu Mi, while very active in the movie industry, has only done a few dramas, so her character of Joo Yeol Mae was my introduction to this fine actress. Her incredibly versatile facial expressions paired with her ability to credibly create passionate love scenes were ideally suited to this role. As a self-described ‘woman with a bad personality’, she wore it as a badge of honor and carried herself with the humorous self-dignity that can only come with age and self-realization.

Kim Ji Woo as Sun Jae Gyung and Kang Ye Sol as Woo Ji Hee were also quite engaging as the best friends. Their ability to convincingly portray emotional issues associated with single women in their thirties was appealing and entertaining.

An interesting addition to the script was Kang Na Hyun (Kim Ye Won). As the young woman who works with Seok Hyun as a co-author and crushes madly on him, she eventually displays maturity beyond her years as she successfully manages her one-sided love and even counsels the emotionally stunted Seok Hyun. Although an irritant in the beginning, her character developed into one of the more intriguing and genuinely original characters of the series. 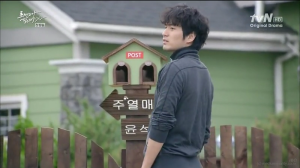 Unlike most dramas I’ve viewed, this one made great use of stills throughout, especially during narratives. The house used for filming (at least the exterior) was adorable. Given the trendy music and interesting characters, I feel there was much more that could have been done to make the cinematography more exciting, but it was definitely adequate.

A little trendier than most OSTs. Nice ballads and one really cool song: “I Could Give You Love”.

This is the opening song. I hated it the first time I heard it, but it grew on me fast and I realized it’s perfect for the drama. “Riding the Wind” Deli Spice http://youtu.be/TSFzPzCQCN4

Best song: “I Could Give You Love” Lasse Lindh

This is a drama that will definitely appeal more to older (30 years +) viewers than younger viewers. And the older the better. The more I watched, the more I realized that there’s a poignancy that only many years of screwed up relationships will really make you appreciate and identify with.

The characters were significantly more realistic than in many dramas. There was also a very pervasive lack of inhibition when it came to discussing the subject of sex. I think if this drama had been aired on SBS or MBC it would have been a very different drama, but because it was tvN, a cable channel, more liberties were taken with the script than would have been allowed in main-stream programming. Refreshing and exciting, really. 😉