Jini says: This news has been on my radar for a while now not only because it’s one of the biggest issues in Korea right now but also because I was at the actual school where some of its leading faculty are on the forefront of this history textbook renationalization effort. It’s pretty cool to be able to recognize several names from the list of professors below, but also surprised that I don’t see some names that I think should be on here… Maybe they just didn’t get the memo?

Okay, from here on out is the news article that I copied and pasted from Dr. Eugene Park’s social media post:

END_OF_DOCUMENT_TOKEN_TO_BE_REPLACED 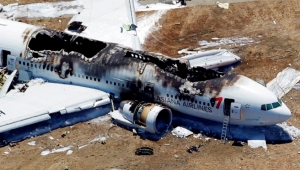 The flight accident of Asiana Airline’s Boeing-777 aircraft in San Francisco Airport made headline news in most of Korean newspapers on July 7th 2013. The crash resulted in two casualties, as well as a wide range of injuries to at least half of the passengers on the plane. It took 10 minutes after the initial crash for the aircraft to explode, and much more casualties would have been inevitable if it wasn’t for the flight attendants and a few brave souls who swiftly evacuated the passengers out of the site.

The two deaths that resulted from the accidents were two Chinese students who had planned to attend an overseas English program in the UC system and Stanford. It is speculated that the two students have not fastened their seat-belts during the turmoil. President Xi Jinping of China has expressed his attention to this incident by softly demanding the truth of the matter.

The US officials who reviewed the content of the blackbox installed inside the aircraft blames the head pilot for the accident, whereas the Korean government is insisting that there is insufficient evidence for the case. The Korean government is currently placing weight on aircraft malfunctioning and conducting an extensive investigation on all of the accessible Boeing-777.

Many Koreans in the San Diego Community were shocked by the tragic news and were also very worried on how Americans would perceive Korea due to this accident. “My main concern is that the US public will see the Korean community with a negative perspective. The images of Koreans are in large part constructed by the successful companies such as Samsung and Asiana, and I hope this incident doing not change their perspectives” states Jang.

Mike Kwak, a relator in the San Diego area added “At first we thought it may have been an engine or weather problem at first, but as we followed the reports, we found out that it may have been a pilot error. I just want the public to know that from my experience, Asiana is very well trained, and this incident proves my point. Though the pilot made a mistake, the attendants quickly took the situation and saved many lives in a relatively short amount of time. Accidents happen from time to time, and this accident will not stop me from taking this route because I trust in the quality of the service. I will continue to take the Incheon=>San Fran Boeing-777 route, and I hope the public feels the same way. 20 years ago, Delta Airlines experienced a similar accident in Dallas, but I didn’t lose faith in Delta Airlines, because I knew it was a reliable airline — again, accidents happen. I wish for the best for the victims of the accident and hope Asiana never repeats its mistakes.”

Ashley, a pharmacist in San Diego, sends her encouraging message to the passengers in the accident. “My deepest condolences to the victims of the accident. I hope the victims pick themselves up from the trauma, and lead fulfilling constructive lives from here on”.

Right now there is an average of 250,000 people are in the air. Though mankind has been taking advantage by cutting transportation time across oceans and between continents by the use of the airplane, this fairly new invention still poses threat to our society’s public safety in numerous angles. Every time I come across news like this, I wonder if technological advancement for efficiency and comfort is all in all beneficial for mankind.

4미닛 현아, 도요다 코롤라 모델되다 – First it was Lee Min Ho with Toyota Camry’s “The One and Only”  ads. Now Hyuna has joined hands with Toyota to create fun music videos promoting the Carolla. Jini and Cheryl were given a heads up about the impending ads at the Lee Min Ho Event in Los Angeles and sure enough, the music video “My Color” is now available!

So what do you think? Are Korean celebs effective marketing agents? The video is sure fun. 🙂

Is PSY the Jennifer Lopez of Korea? According to Forbes, that may be true. The full list for Forbes Korea’s “2013 Power Celebrity 40” was revealed this week with PSY unsurprisingly taking the top spot. He snatches the No. 1 position from Girls’ Generation who held it for two years and now settle in at No. 2.

South Korea on Monday inaugurated its first female president, Park Geun-hye, who promptly warned North Korea that it will suffer the most if it continues pursuing its nuclear program

Welcome to the international stage, say hi to Psy and then issue a warning about North Korea. South Korea on Monday inaugurated its first female president, Park Geun-hye, who promptly warned North Korea that it will suffer the most if it continues pursuing its nuclear program. Park, 61, is the daughter of Park Chung-hee, who oversaw South Korea’s huge growth on the international stage but was often reviled for his iron-fisted rule. He was assassinated 34 years ago, and his daughter’s election late last year had been carried mainly by older voters who still remembered his glory days. At Monday’s inauguration—which included a performance by “Gangnam Style” rapper Psy—Park promised “economic rejuvenation” of South Korea.

Read it at The New York Times

The nominees have been announced for the Academy Awards and Minkyu Lee, whom we suspect to be Korean, is one of them with his short animation ‘Adam and Dog’. We have been researching him on various blogs to learn more about this animator and although information is very scarce, we want to congragulate him on this nomination. What we did find though was a trailer for this film which you can check out here at: http://www.youtube.com/watch?v=6Dr66BBEZAg  Looks beautiful!

From what we also gathered on a particular blog, Lee has been working on this for the past 2 years with just a few other friends who are fellow CalArts grads. The backgrounds of this film are also painted by Lee himself. See the blog post here: http://blackwingdiaries.blogspot.com/2012/01/minkyu-lees-adam-and-dog-trailer.html

Solitary islands in the land of morning calm. Why the Dokdo Island is important to Korea and what we should know.

Information provided by “dokdo-takeshima.com”, a website with historical facts about Korea’s Dokdo Island.

Dokdo is the easternmost territory of Korea and situated 87.4km to the SE of Ul-leung-do Island. It is not one island, but consists of two large islands Dongdo and Seodo and 89 small islands around them. There are about 37 South Korean police that guard the islets, and three lighthouse keepers living on the islets in rotation. In the past, several fishermen also lived there temporarily. In 2005, a South Korean couple held the first recorded wedding ceremony on Dokdo Island.

Although the islets themselves are barely habitable, the Exclusive Economic Zone surrounding them has rich fishing grounds and possible reserves of natural gas. As of 2006, the expected reserves have not been found. A wide variety of fish as well as seaweed, kelp, sea slugs, and clams are located around Dokdo Island. Major fishery catches in the area are squid, Alaskan pollock, codfish, and octopus. There are 102 species of seaweed, although many of these have no economic value.

So, what’s the dispute over Dokdo?

Alongside other Japan–Korea disputes, Dokdo Island remains a point of heated contention. Korea and Japan have a long, complex history of cultural exchange, war, and political rivalry. The islets are the last disputed territory between Korea and Japan following World War II. Although Japan’s MOFA insists Allied Command granted Dokdo to Japan after the Second World War, there was no mention of Dokdo in the Japan Peace Treaty, leaving the issue unsettled.

The Japanese Ministry of Foreign Affairs considers its position “inalterable”. When Japan’s Shimane prefecture announced a “Takeshima Day” in 2005, ( Japan’s Legacy of Expansionism Continues ) Koreans reacted with demonstrations and protests throughout the country, extreme examples of which included a mother and son slicing off their own fingers, and a man who self-immolated. In 2006, five Korean “Dokdo Riders” embarked on a world tour to raise international awareness of the dispute. Another notable protest featured South Koreans decapitating pheasants in front of the Japanese Embassy.

Although claimed by both Korea and Japan, Dokdo Island is currently administered by the Republic of Korea. Both nations’ claims extend back at least several hundred years. Significant arguments supported by a variety of historical evidence have been presented by both parties, which have been challenged by counter-arguments with varying degrees of success. North Korea supports South Korea’s claim.

Please visit the website dokdo-takeshima.com and continue reading for more historical facts and information. The website is run by various experts on the subject of Dokdo islands, including Steven J Barber who started the website 6 years ago to “create a stable database that could make this valuable data accessible for years to come.”

and Huffington Post’s article (with a photo slideshow and descriptions) : http://www.huffingtonpost.com/2012/12/19/park-geun-hye-elected_n_2330721.html

To grasp that dollar amount, that is precisely *uses calculator* $36 million dollars more than what a KKonnect blogger makes in six years. But seriously, we blog for the thrill of it.

K-Connect
Create a free website or blog at WordPress.com.