Is Money the Root of the 7 Deadly Sins? 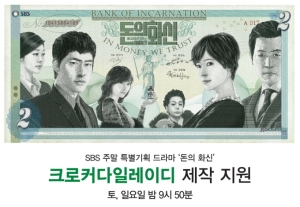 The eternal battle – winning at all costs verses leading a righteous life.

A story of the redemption of some, for others, the inability to redeem one’s self.

And money. Lots of money. BIG money. The kind of money that incites enormous greed and induces people to abandon their convictions and sense of moral responsibility in order to acquire it.

“Money is God”, Lee Kang Suk’s father tells him at a young age. A bright child raised in a wealthy household with a doting mother, attentive staff and proud but often-absent father, Kang Suk is a confident young man with a bright future ahead of him. The fairy-tale future crashes around him when his father’s mistress, Eun Bi Ryung and right hand man, Ji Se Kwang conspire to kill his father and frame his mother. Stripped of his family and wealth, the young Kang Suk discovers the truth and becomes the target of twisted cruelty.

Injured and suffering memory loss, Kang Suk is discovered by the powerful, politically connected loan shark Bok Hwa Sool and her quirky daughter Bok Jae In, who christen him with the name Lee Cha Don. They eventually place him in an orphanage, but provide funds for the best education. 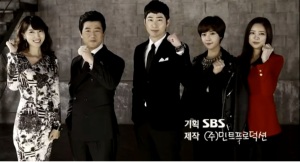 A hero who is beautifully flawed, imperfect – gasp – even criminal! Lee Cha Don grows up to be a conceited, self-assured, money-hungry extortionist. Not your average Prince Charming, to be sure.

Jae In, our heroine, is a conceited, self-assured but approval-seeking, food-hungry, overweight over-eater. Not your average Princess.

The story revolves around the struggles of the conspiracy group who killed Kang Suk’s father and conspired to keep everything secret and their rise to powerful positions with the help of the money stolen the family, and Lee Cha Don’s (Kang Suk’s) discovery of his own identity and battle to set things right.

As an actor who appears equally comfortable dressed in a fashionable three-piece suit and dressed in drag as a dynastic queen, Kang Ji Hwan is remarkable to say the least. His acting style is amusing and engaging. His performances are honest. His portrayal of Lee Cha Don/ Kang Suk was, for the most part, credible. 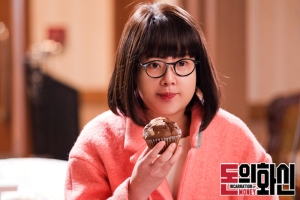 Hwang Jung Eum played Bok Jae in, the wealthy loan shark’s daughter with an unusual personality. Although her character in this drama was not very appealing, whether it was the actress or the script is debatable.

The script called for Bok Jae In to be grossly overweight, a theme that’s been used successfully in dramas like Dream High and less effectively in dramas like Romance Town. The make up work is outstanding. It’s difficult to see where the real actor ends and the artificial pudge begins. The question becomes whether or not the weight issue is necessary or if it is being used rather gratuitously and/or abusively. In Dream High, the weight issue was vital to IU’s character. In Incarnation of Money, not so much. The character of young Bok Jae In was unpleasant and unappealing even without the weight factor. Using weight for gratuitous purposes felt like a cheap shot throughout the series.

The other issue it caused was the implausible nature of the romance between Lee Cha Don and Bok Jae In. Lee Cha Don thoroughly disliked Bok Jae In when she was overweight but began to love her after plastic surgery (cheater!) Nothing in her personality changed at all, yet viewers are supposed to believe that Cha Don loves Jae In for who she is. There was nothing in the script to support this premise, so the romance always felt artificial and was a major detraction from the story. 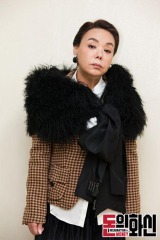 Take out the romance, though, and a fine Machiavellian tale emerges of lust, greed, avarice, wrath, pride and envy. (For those wondering, that’s 6 out of the 7 Deadly Sins. Perhaps Jae In’s gluttony was included to make a perfect set?) Park Sang Min was entirely believable as the sleazy prosecutor cum murderer Ji Se Kwang. Oh Yoon Ah as Eun Bi Ryung, mistress, abandoned lover, and not-so-intelligent businesswoman, was required to play a huge variety of emotions and character iterations and did so with style. The other major characters in the evil cadre, Lee Seung Hyung as Go Ho and Lee Ki Young as Kwon Jae Kyu added depth and drama. The loan shark, Bok Hwa Sool, played by Kim Soo Mi, was a delightfully witty character. Her descent into dementia was treated with dignity and humor, and acted with soul.

There were, to be sure, a few unbelievable gaffes – like the evil chief prosecutor Ji Se Kwang goading Cha Don by telling him their plans as a fait accompli in writing via email. Pure silliness.

While my preference would have been to leave out Bok Jae In’s weight problem, the make-up work was very well done. Filming for some stunts was also nicely done, others were kind of cheesy. Cinematographic themes that began at the onset were not carried out throughout the drama, making it feel almost as if a new cinematographer was introduced at some point.

Drama clichés: Same old prison, same sets as seen in many others; shower scene (thank you, Kang Ji Hwan); little bit of a turnaround as we have a rich girl, poor boy (who should have been a rich boy, alas). 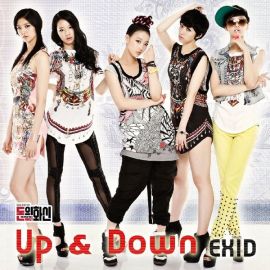 Final song “Up and Down” EXID extremely fun, catchy (But then, I’m a big EXID fan…): http://www.youtube.com/watch?v=v7qFVs4RbC8

“Memories of You” IVY http://www.youtube.com/watch?v=8jbjf2mOqHM

“You Are the Love” Seo In Young http://www.youtube.com/watch?v=nGc41fdoDp0

Great Song! “The Day for You” Jang Jae In

I debated long and hard over what kind of overall rating to give this drama. There was so much to like in this drama series! The general concept was good. The acting was good. The music was good. The cinematography was fine. The biggest problem was that the romance in the drama was so implausible that it was a difficult hurdle to overcome, and it colored too much of the drama. Had the romance had been downplayed, perhaps I could have scored the drama higher. But even the ending rested on the culmination of the romantic pairing, in the worst possible context, in the least probable way. Better characters were left unaccounted for and instead the focus was placed on the least gratifying aspect of the series.

Other aspects of the drama ended pretty well. Conclusions for the ‘axis of evil’ while not entirely explained, were at least appropriate. I find it interesting that directors and scriptwriters feel that romance (at any cost) is more important than a good story. 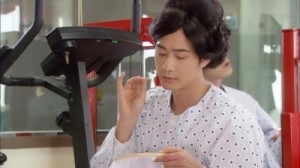