U-Kiss to make their last stop on their U.S Tour in L.A!

U-Kiss will be staring off the New Year on their first ever U.S Tour and will finally get to see their American fans up close and personal. The boys will be hitting New York at the Best Buy Theater (January 9/Thursday), San Francisco at the Warfield Theater (January 11/Saturday) and Los Angeles at Club Nokia L.A Live (January 14/Tuesday). Ticket prices to range from $50-$180. 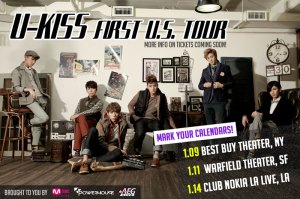 U-Kiss will become the special episode for the Mnet America’s music-themed T.V series Headliners, incorporating special concert footage, candid moments and live events for the international fans. Artists like Psy, Big Bang and Aziatix have already starred in the first three episodes respectively with their own interviews and performance shows.

U-Kiss is an international Korean Boy Band consisting of multi-lingual members, Kevin, Eli, Hoon, Soo-hyun, Ki-seop and AJ. U-Kiss debuted back in 2008 with NH Media and has since brought out memorable tracks like “0330”, “Neverland”, “Standing Still”, “Stop Girl”, and most recently “She’s Mine” which came out October 31, 2013.

Follow Mnet America on Facebook (www.facebook.com/mnetusa), Tumblr (mnetamerica.tumblr.com), Twitter and Instagram (@mnetamerica), for all the latest news on the tour.  Tickets will be available through www.powerhouselive.net,www.AXS.com and www.ticketmaster.com as well as at each tour venue’s box office.